Review: The Pretty One by Lucinda Rosenfeld 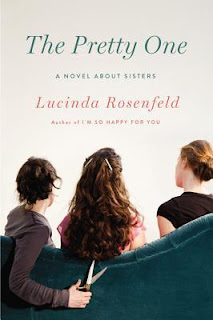 Pages: 320
Received: Received a copy the publisher through Netgalley

Perfect. Pretty. Political. For nearly forty years, The Hellinger sisters of Hastings-on-Hudson-namely, Imperia (Perri), (Pia), and Augusta (Gus)--have played the roles set down by their loving but domineering mother Carol. Perri, a mother of three, rules her four-bedroom palace in with a velvet fist, managing to fold even fitted sheets into immaculate rectangles. Pia, a gorgeous and fashionable art gallery worker, still turns heads after becoming a single mother via sperm donation. And Gus, a fiercely independent lawyer and activist, doesn't let her break-up from her girlfriend stop her from attending New Year's Day protests on her way to family brunch.

But the Hellinger women aren't pulling off their roles the way they once did. Perri, increasingly filled with rage over the lack of appreciation from her recently unemployed husband Mike, is engaging in a steamy text flirtation with a college fling. Meanwhile Pia, desperate to find someone to share in the pain and joy of raising her three-year-old daughter Lola, can't stop fantasizing about Donor #6103. And Gus, heartbroken over the loss of her girlfriend, finds herself magnetically drawn to Jeff, Mike's frat boy of a little brother. Each woman is unable to believe that anyone, especially her sisters, could understand what it's like to be her. But when a freak accident lands their mother to the hospital, a chain of events is set in motion that will send each Hellinger sister rocketing out of her comfort zone, leaving her to wonder: was this the role she was truly born to play?

With The Pretty One, author Lucinda Rosenfeld does for siblings what she did for female friendship in I'm So Happy for You, turning her wickedly funny and sharply observant eye on the pleasures and punishments of lifelong sisterhood.

I love books about family relationships especially those dealing with siblings who are all different from one another. I honestly didn't feel that I got much out of this book when I finally finished it. So much seemed to happen in this story and nothing truly got resolved (at least inn my opinion).

What I really felt was that I was thrown into the story right away, and readers don't get much of a chance to get to know the characters. The way each of the sisters are described to readers in a way that makes us seem like we should already know them. I wanted more from the sisters and to understand them and their motives better. I felt like each of the characters were very one dimensional to me as a reader. Though despite that I did enjoy some parts of the story, how each of the sisters were so different from one another and their interactions with one another really showed that off.

Rosenfeld did attempt to dig into the sister rivalry in this story, I just think that there was too much happening to really get to that point. Readers see how the parents of these three sisters have helped with the rivalry always comparing the sisters and causing them to attempt to one up each other in adulthood. Rosenfeld also focuses on the relationship of the parents and the children where the middle child is often left out and seems not to have accomplished as much as the other two sisters.

The first chapter of this book was very long and drawn out and made it difficult for me to understand what was really happening. I believe that it was longer because it was supposed to help introduce readers to each of the sisters but I felt like it was slow and it made it difficult for me to get into the story. From there the story switches perspectives between the three sisters and it felt a little too broken up and uneven.

About halfway through the story many things start happening with the sisters and their lives that it just became difficult to follow along. I felt that this story just had too much going on for one book. I think it could have been better if there were different books focused on each sister, giving readers more time to understand and connect with each of the girls, and the problems would be more fleshed out. Everything happened so fast and I felt that nothing was solved by the end of this book, there was too much left open.
Posted by Andrea @ Cozy Up at 6:00 AM