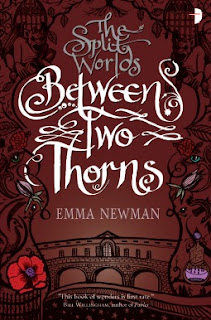 Pages: 384
Received: Received an e-copy from the publisher

Something is wrong in Aquae Sulis, Bath’s secret mirror city.

The new season is starting and the Master of Ceremonies is missing. Max, an Arbiter of the Split Worlds Treaty, is assigned with the task of finding him with no one to help but a dislocated soul and a mad sorcerer.

There is a witness but his memories have been bound by magical chains only the enemy can break. A rebellious woman trying to escape her family may prove to be the ally Max needs.

But can she be trusted? And why does she want to give up eternal youth and the life of privilege she’s been born into?

"Something is wrong in Aquae Sulis, Bath's secret mirror city" that one line drew me into this book, a secret world that coincides with England, it was intriguing. Emma Newman has created a magical land where the fae live, but it is based off a normal England and is connected to it. There was a little bit of an explanation of this new and interesting world, but I did feel that it needed to be fleshed out a little more (something to look forward in the future books).

This story has many different aspects to it, but the way Newman writes it does not feel like there is too much, everything seems to come together perfectly like a puzzle. In the story there are the characters of the fae, and their lords, then we have the Arbiter's and sorcerers who take care of the unmagical world and make sure that the fae don't do anything funny over there. We also have non-magical characters, who all work together to solve a case of a missing person. I was interested in the mystery but I feel like it paled into comparison to the rest of the book, learning about the characters and their motivations was what really kept my attention.

I loved each of the characters, everyone was unique and had something intriguing about them. Catherine was my favourite, she is against everything that her family believes in and is looking for a way out. She has a very strong personality and works hard to get what she wants, she has fight in her and I'm excited to know what will happen to her character in the next book after the ending of BETWEEN TWO THORNS. Will is her fiancé (in an arranged marriage), and at first I found him to be spoiled and obnoxious, but I really came to like him as I read on. Will is someone who will do anything for his family and he just wants to make everyone around him happy, he really becomes charming and I think there is more to him to get to know later on.

This book had everything to it, magic, mystery and some romance, with a huge dose of family drama, and it all worked so well together. The ending left me completely blown away and eagerly awaiting the second instalment of the series, I can tell there is going to be even more mystery and intrigue that will keep me up trying to figure out what is happening.

There was one small tidbit that got on my nerves throughout the book, and that was the amount of time the clothes were described. I can tell that the point was to get across to readers the difference between the "Mundane" world and "Aquae Sulis" but I felt like it was overdone. There are many descriptions of the dresses and the difference in style (because we are being taken back to the Victorian age), and Catherine always compares her wardrobe to the Mundane's and how theirs is so much more freeing.

All in all I really enjoyed what Newman did with this book, and I think it is a great magical tale with a surprising amount of creepiness and political aspects.
Posted by Andrea @ Cozy Up at 6:00 AM