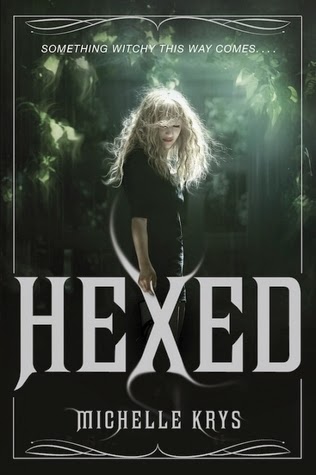 If high school is all about social status, Indigo Blackwood has it made. Sure, her quirky mom owns an occult shop, and a nerd just won’t stop trying to be her friend, but Indie is a popular cheerleader with a football-star boyfriend and a social circle powerful enough to ruin everyone at school. Who wouldn’t want to be her?

Then a guy dies right before her eyes. And the dusty old family Bible her mom is freakishly possessive of is stolen. But it’s when a frustratingly sexy stranger named Bishop enters Indie’s world that she learns her destiny involves a lot more than pom-poms and parties. If she doesn’t get the Bible back, every witch on the planet will die. And that’s seriously bad news for Indie, because according to Bishop, she’s a witch too.

Suddenly forced into a centuries-old war between witches and sorcerers, Indie’s about to uncover the many dark truths about her life—and a future unlike any she ever imagined on top of the cheer pyramid.

I was so excited about this book, just look at the cover, and going back to the idea of witches, I miss those type of books. The idea behind the book was great, but I have to say that the story did not completely play out as I was expecting, and the story fell a little short. The main issue with this book is that a lot is going on with little explanation. I felt quite confused throughout the story and it wasn't until closer to the end that things started making a bit more sense. The book leaves readers hanging with so many questions, and not enough character development.

I did enjoy the characters at times, Indigo was interesting and I liked her attitude throughout. She is ready to fight even though she doesn't completely understand what is happening because no one will fully explain things. I feel that Indigo still has a lot of growing to do over the series, but this book was a good start to showing she will fight for what's right. I think she is good at thinking on her feet at times throughout the story, but at other times she does regress into a confused girl (which is understandable for some of the situations). I think Indigo is a character readers take time to warm up to, she isn't the nice girl that everyone loves, and that made the book different than many others. Bishop was one person that I wanted more information on, he appears and disappears so much throughout the novel that readers don't really get a chance to know or understand him. The characters in this story were too one-dimensional and need to be fleshed out more, though the story needs more information itself.

I really liked the idea of the war between witches and sorcerer's and I think this was an interesting way to take the story, but I needed more of that, than focusing on Indigo and her life sometimes. There were some interesting action scenes involving the magic but they were few and far between. I want to know more about both these groups, because the idea behind the feud is intriguing and has me wanting to know more. I can tell that Michelle Krys has an interesting story, it just needs a little more work to keep the attention of some readers.

The most confusing part for me was how the story was narrated, it seemed to jump around at times, and I was confused as to what was happening. The ending definitely leaves me interested to know what will happen next for Indigo, if not at least to understand more about "The Family" and their true purpose in the world. The magic aspect was great and I think it really added to the story from where it fell short in places. In the end, I don't think this was the book for me (probably not really the target audience for it), but I can see there being progress as the series goes on.
Posted by Andrea @ Cozy Up at 6:00 AM