Review: If You Could Be Mine by Sara Farizan 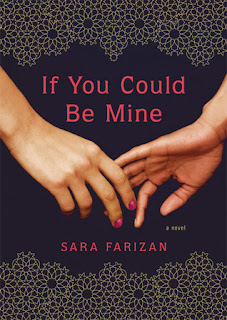 In this stunning debut, a young Iranian American writer pulls back the curtain on one of the most hidden corners of a much-talked-about culture.

Seventeen-year-old Sahar has been in love with her best friend, Nasrin, since they were six. They’ve shared stolen kisses and romantic promises. But is a dangerous place for two girls in love—Sahar and Nasrin could be beaten, imprisoned, even executed if their relationship came to light.

So they carry on in secret—until Nasrin’s parents announce that they’ve arranged for her marriage. Nasrin tries to persuade Sahar that they can go on as they have been, only now with new comforts provided by the decent, well-to-do doctor Nasrin will marry. But Sahar dreams of loving Nasrin exclusively—and openly.

Then Sahar discovers what seems like the perfect solution. In , homosexuality may be a crime, but to be a man trapped in a woman’s body is seen as nature’s mistake, and sex reassignment is legal and accessible. As a man, Sahar could be the one to marry Nasrin. Sahar will never be able to love the one she wants, in the body she wants to be loved in, without risking her life. Is saving her love worth sacrificing her true self?

This is a beautiful debut book about changing yourself for someone else, and what it can do to you. Sara Farizan takes on a difficult topic in this book, Sahar deals with many secrets, and she thinks that sexual reassignment surgery will give her everything she wants.

Sara does a great job at showing how scary it is to be different in the culture and how hard it is to keep certain aspects of your life secret. I loved the idea of this story, it's something different and absolutely beautiful, it's a story of choosing between being yourself and being with the one you love. Sahar and Nasrin are best friends and over time they have fallen in love, but this type of relationship is forbidden in Iran and people have been put to death so they must keep it secret.

I felt really bad for Sahar, throughout the story it felt that she was being used, and what I think is needed is Nasrin's point of view to see how she felt about everything that was going on. There are some amazing interactions between Sahar and her father and also with her cousin. I loved how their relationships grew over such a short time, and to see that there are people who are there for you.

I really wanted to like the character of Nasrin, but I felt she was selfish and that she was immature a lot of the time. Sahar was an amazing character who wanted to do anything she could to stay with the person she loved most in the world. For such a short book, I loved what Sahar learns about herself and how she grows. I also really enjoyed Sahar's cousin and how he helped her through a lot of things.

This story is very short, and I felt like things happened very quickly, I wish there could have been a little more time to get to know some of the characters. I also would have liked to know a little more about the setting as well, learn a little more about Iranian customs. This is a beautiful story of learning about your true self and really learning when it's best to let go. Though you can tell this is a debut book, you can also see in the writing that Sara Farizan will go far with her writing.
Posted by Andrea @ Cozy Up at 6:00 AM