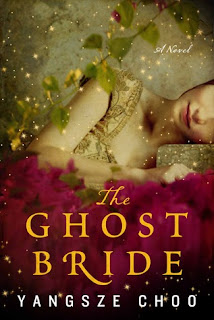 "One evening, my father asked me if I would like to become a ghost bride..."

Though ruled by British overlords, the Chinese of colonial still cling to ancient customs. And in the sleepy port town of , ghosts and superstitions abound.

Li Lan, the daughter of a genteel but bankrupt family, has few prospects. But fate intervenes when she receives an unusual proposal from the wealthy and powerful Lim family. They want her to become a ghost bride for the family's only son, who recently died under mysterious circumstances. Rarely practiced, a traditional ghost marriage is used to placate a restless spirit. Such a union would guarantee Li Lan a home for the rest of her days, but at a terrible price.

After an ominous visit to the opulent Lim mansion, Li Lan finds herself haunted not only by her ghostly would-be suitor, but also by her desire for the Lim's handsome new heir, Tian Bai. Night after night, she is drawn into the shadowy parallel world of the Chinese afterlife, with its ghost cities, paper funeral offerings, vengeful spirits and monstrous bureaucracy—including the mysterious Er Lang, a charming but unpredictable guardian spirit. Li Lan must uncover the Lim family's darkest secrets—and the truth about her own family—before she is trapped in this ghostly world forever.

I was definitely not expecting what I got from this story by the synopsis. I was definitely intrigued, but as I read more into the book it became such a beautiful story about a woman doing everything she could to take back her life. Yangsze Choo has written an incredible and very magical story that I think many people will love.

Li Lan receives a proposal from a very powerful family to become a bride to their son, who has passed away a year ago. The idea of a ghost bride is a very rare thing and Li Lan knows that she wants a real marriage. But after refusing the proposal Li Lan begins to be haunted constantly by the son, and she also falls in love with Tian Bai, the new heir to the family. Li Lan becomes drawn into the world of the afterlife and before she is stuck there she must uncover many secrets of the Lim family as well as her own family line.

I absolutely loved the setting of this story, the descriptions were so real and really brings the readers into the Chinese world. I was really intrigued by the mythology that Yangsze writes, and it's something I am interested in researching more (it's great when a book makes you want to look more into ideas). Yangsze explains how the Chinese handle death and what the family members do to help them cross over. And the dream sequences throughout the book felt very real and I loved being there.

The characters in the book were very real and were people I would be interested to get to know, I really loved Li Lan and her resolve to get to the bottom of the secrets behind the families. As much as I loved Li Lan and following her on her journey as she grows and learns about her family's past, I also loved many of the secondary characters. The most intriguing character was Er Lang, a guardian of Li Lan's, he (like many of the other characters) is someone you are unsure about, the motives are never outright specified, making it difficult to trust anyone that Li Lan comes into contact with.

I was surprised that this is a debut book, it does not feel like one at all, Yangsze really has a beautiful writing style and brings Chinese history to life in The Ghost Bride. This is a hard book to talk about without giving too much away, but the story that Yangsze has written here is very unique. I loved everything about this book down to the ending, with all of it's surprises it was a beautiful book about this girl coming to age in a different culture, and you definitely get a great immersion into that culture.

For more information about Yangsze Choo and The Ghost Bride, check out the Harper Collins Canada website.
Posted by Andrea @ Cozy Up at 6:00 AM