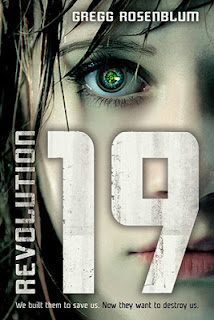 Pages: 272
Received: Received a copy from Harper Collins Canada in exchange for an honest review

Twenty years ago, the robots designed to fight our wars abandoned the battlefields. Then they turned their weapons on us.

Only a few escaped the robot revolution of 2071. Kevin, Nick, and Cass are lucky —they live with their parents in a secret human community in the woods. Then their village is detected and wiped out. Hopeful that other survivors have been captured by bots, the teens risk everything to save the only people they have left in the world—by infiltrating a city controlled by their greatest enemies.

Revolution 19 is a cinematic thriller unlike anything else. With a dynamic cast of characters, this surefire blockbuster has everything teen readers want—action, drama, mystery, and romance. Written by debut novelist Gregg Rosenblum, this gripping story shouldn’t be missed.

So I read ROBOPOCALYPSE by Daniel Waters last year and loved it, and when I read the synopsis to this I thought a lot about that book for a younger generation. There was a creepy feeling at times to this book but it didn't really live up to what I was hoping. I found the book to be surprisingly short, and I was hoping for more to the story, I really felt that there wasn't enough information for me in this book (I'm not certain if this is part of a series).

I felt that Rosenblum did a great job with the world building in this book, he really made readers understand how and why the robots took over. The robots had a natural progression and evolution that is expected of technology, and I really liked the idea of why the robots took over, it was an interesting idea. For a novel like this, that is one of the most important things, but for me character development is important too and I think this story missed the mark a bit on that.

I liked a couple of the characters, but for the most part I just couldn't connect with them and felt that they didn't have much development over the course of the novel. They had one goal in mind and did everything possible to achieve that, which I admire immensely but I felt there should have been more to the characters. I did really enjoy the character of Kevin, how he was so immersed in learning more about the technology behind things. I think of all the characters, Kevin was one that actually grew throughout the story. He learned about things and understood how to change certain things to make it work for him.

REVOLUTION 19 did deliver on the action and intrigue about the robots, and this new world that was built. I enjoyed how Rosenblum describes the city center and he goes into great detail on the technology behind everything, which made this interesting at times. The main reason this book fell flat was the characterization, and I feel that if this does become a series that it can grow on people.

For more information on Gregg Rosenblum and Revolution 19 visit the Harper Collins Canada webpage.
Posted by Andrea @ Cozy Up at 8:00 AM