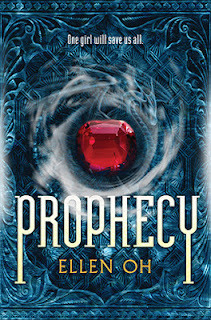 Pages: 312
Received: Borrowed from a friend

Kira’s the only female in the king’s army, and the prince’s bodyguard. She’s a demon slayer and an outcast, hated by nearly everyone in her home city of . And, she’s their only hope...

Murdered kings and discovered traitors point to a demon invasion, sending Kira on the run with the young prince. He may be the savior predicted in the Dragon King Prophecy, but the missing treasure of myth may be the true key. With only the guidance of the cryptic prophecy, Kira must battle demon soldiers, evil shaman, and the Demon Lord himself to find what was once lost and raise a prince into a king.

Intrigue and mystery, ancient lore and action-packed fantasy come together in this heart-stopping first book in a trilogy.

This book sounded a lot like GRACELING (which I didn't really like all that much when I read it, but will have to try again after reading this one). I was so taken with the synopsis that I needed to read this book and see what it was like, and wow did it ever capture my attention! I really enjoy the quest narratives in books and this one delivered well on that front.

This was a great book that dealt with family relationships (I have found that there are a few more YA books coming out lately that have the close family bond). Kira is a demon slayer who is in the kingdom to protect the prince who just so happens to be her cousin. I love the relationship between these two because even though they are younger they are close and the prince relies on her a lot. But I could also see Kira reciprocating her love for her cousin and will do anything to keep him safe. I really found that the story was propelled by the idea of family ties.

This book opens up with a lot of action and it is easy to see that there will be a lot more action throughout. I really found that PROPHECY delivers on the action front and keeps you intrigued with the quest happening and the different ideas that come up. The story line was definitely intriguing and I really felt like Ellen Oh brought out a great new fantasy novel.

I did have one small issue with the story though, I felt that the character of the prince acted a lot younger than  I was expecting. For a character that is supposed to be prince in the future they should have strength and should give off a feeling of power, but I felt like the his character was overly childish and cried a lot more than I liked.

All in all this was such a fun book and I will happily continue with this series (and I need to go back and read GRACELING with how much these two resemble each other). As an added bonus, this book has an amazing Asian setting, which is different from a lot of fantasy novels like this one. The characters and the history was well done, I just hope for a little more world building in future books. There were still a few questions left unanswered and I would like to know more about these characters.
Posted by Andrea @ Cozy Up at 8:00 AM