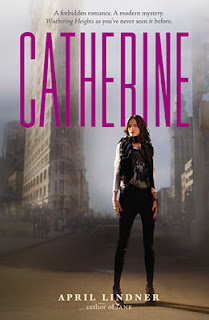 Pages: 320
Received: Received an e-arc from the publisher

A forbidden romance. A modern mystery.  as you’ve never seen it before.

Catherine is tired of struggling musicians befriending her just so they can get a gig at her Dad’s famous club, The Underground. Then she meets mysterious Hence, an unbelievably passionate and talented musician on the brink of success. As their relationship grows, both are swept away in a fiery romance. But when their love is tested by a cruel whim of fate, will pride keep them apart?
has always believed that her mom died of a sudden illness, until she finds a letter her dad has kept from her for years—a letter from her mom, Catherine, who didn’t die: She disappeared. Driven by unanswered questions, sets out to look for her—starting with the return address on the letter: The Underground.

I loved WUTHERING HEIGHTS when I read it back in university, the characters were different and they had attitude. I'm always weary of retellings, even though I've had luck with quite a few in the past year, it's still something that I'm scared of because these types of books can easily be ruined. I found I had a few problems with the book, but overall I thought this was a great retelling of the classic story.

CATHERINE takes readers to modern day New York as the setting of this classic, and what really caught my attention is that Lindner places her characters in the rock and roll music scene. I thought Lindner did a great job bringing this story to modern times and took an interesting perspective to her writing style. I enjoyed the different perspectives between the present time having Chelsea search for her mother, and the past where we learn what Catherine went through that would cause her to possibly run away from her family.  But as much as I liked this twist because it brought up a great mystery aspect to the story, I felt like I wanted more of Catherine's back story and that Chelsea's story was getting in the way at times.

I also really wanted Catherine to be more like the original Catherine, I loved the character of Catherine in this story, and in WUTHERING HEIGHTS she was mean and vindictive herself a lot of the time, which was what made the story of her and Heathcliff so difficult. I felt that this was a great love story and I really loved Catherine and Hence. The character of Hence was interesting in this retelling, he's a tragic character but you see what Catherine loved about him in her story, and though when I was reading Chelsea's perspective I had a hard time liking him by the end of the story I really saw him for what Catherine saw.

The ending kind of took me by surprise, after going through the whole story, as I got closer I started thinking Lindner might take it that way, but I really hoped she wouldn't. It was a bit disturbing for me and really couldn't believe it. The ending made me quite emotional and I really had hoped it would end differently. But all in all, I really enjoyed this and couldn't tear my eyes away from the story. For a retelling, I definitely think Lindner did a beautiful job.
Posted by Andrea @ Cozy Up at 8:00 AM