Waiting on Wednesday is a weekly meme hosted by Jill at Breaking the Spine, where we can show off books we are really excited for.

So I haven't done one of these in awhile because they got very repetitive, but I had to do this one because I am really excited for this book! 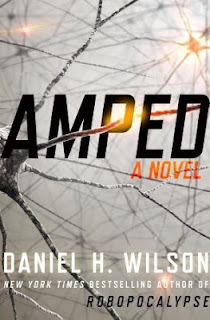 
As he did in Robopocalypse, Daniel Wilson masterfully envisions a frightening near-future world. In Amped, people are implanted with a device that makes them capable of superhuman feats. The powerful technology has profound consequences for society, and soon a set of laws is passed that restricts the abilities—and rights—of "amplified" humans. On the day that the Supreme Court passes the first of these laws, twenty-nine-year-old Owen Gray joins the ranks of a new persecuted underclass known as "amps." Owen is forced to go on the run, desperate to reach an outpost in Oklahoma where, it is rumored, a group of the most enhanced amps may be about to change the world—or destroy it.

Once again, Daniel H. Wilson's background as a scientist serves him well in this technologically savvy thriller that delivers first-rate entertainment, as Wilson takes the "what if" question in entirely unexpected directions. Fans of Robopocalypse are sure to be delighted, and legions of new fans will want to get "amped" this summer.

So I absolutely loved Robopocalypse when I finally read it, and now he has another one coming out, I am so excited to see what Daniel Wilson is going to do with this. It sounds amazing!
Posted by Andrea @ Cozy Up at 9:00 AM