Review: Above by Leah Bobet 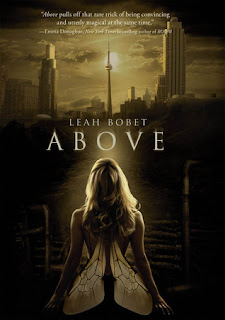 A gorgeous urban fantasy about dangers outside and in.

Matthew has always lived in Safe, a community hidden far beneath the pipes and tunnels of the city Above. The residents fled to Safe years before to escape the Whitecoats and their cruel experiments, and now Matthew is responsible for both the keeping of Safe’s stories and for Ariel—a golden-haired shapeshifter, and the most beautiful girl he’s ever seen.

But one horrifying night, an old enemy murders Safe’s founder, Atticus, and the community is taken over by an army of shadows. Only Matthew, Ariel, and a handful of friends escape Above. Now they not only have to survive in a sunlit world they barely know, but they must unravel the mystery of the shadows’ fury and Atticus’s death. It’s up to Matthew to find a way to remake Safe—not just for himself and his family, but for Ariel, who’s again faced with the life she fled, and who needs him more than ever before.

An urban fantasy and a love story, Above is the breathtaking debut of an extraordinary new voice.

This book took me a little bit of time to get into because of the writing style, it was difficult for me to understand at first. But after reading a few pages I really found myself understanding the style, it was a kind of poetic style which I really loved! It's very unique and interesting for a story to be told in this way.

I really liked the setting of Above being in Toronto. I loved reading the story and being able to follow the characters through the city that I know (though I don't know if Leah intended it to be a more paranormal Toronto from what we know).

I was surprised to find that the story is actually told from Matthew's point of view rather than Ariel (which is what I thought, shows to never judge a book by it's cover). I actually enjoyed it more from the male perspective, and seeing how much he cared for Ariel instead of seeing the female perspective of the relationship.

The romance side was only a small part to the story, there was so much going on, especially with the fact that Matthew must work to keep everyone Safe while trying to solve the mystery of how it came to be unsafe for them. I really enjoyed that Leah uses the present and the past to solve this mystery, with each chapter you learn about the past of each of the characters and in a way this helps Matthew solve the mystery.

Leah does a beautiful job conveying this story, I found it to be an amazing take on conforming. The people in Safe are known as Sick, Freaks, or Beasts, they are trying to get by with how they were born. They avoid Above because the people from there are trying to make them 'normal' and fix them of their problems. I felt that this was an amazing commentary on the idea of conforming to everyone else (or in a way fighting against that conformity).

This book was very well done, and I am excited to see more from Leah in the future!
Posted by Andrea @ Cozy Up at 9:30 AM