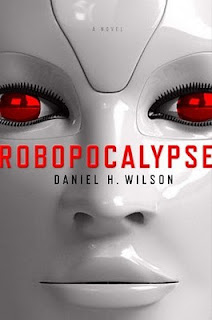 In the near future, at a moment no one will notice, all the dazzling technology that runs our world will unite and turn against us. Taking on the persona of a shy human boy, a childlike but massively powerful artificial intelligence known as Archos comes online and assumes control over the global network of machines that regulate everything from transportation to utilities, defense and communication. In the months leading up to this, sporadic glitches are noticed by a handful of unconnected humans – a single mother disconcerted by her daughter’s menacing “smart” toys, a lonely Japanese bachelor who is victimized by his domestic robot companion, an isolated U.S. soldier who witnesses a ‘pacification unit’ go haywire – but most are unaware of the growing rebellion until it is too late.


When the Robot War ignites -- at a moment known later as Zero Hour -- humankind will be both decimated and, possibly, for the first time in history, united. Robopocalypse is a brilliantly conceived action-filled epic, a terrifying story with heart-stopping implications for the real technology all around us…and an entertaining and engaging thriller unlike anything else written in

This book is creepy, but so good, I could not put it down at all! It's so creepy because Daniel makes it feel so realistic. Seriously I still believe that in the future we will have technology that can do things for themselves, and what will life be like then? I really hope it doesn't get to this point.

I enjoyed Daniel's way of writing this story, I was hesitant at first but it really catches your attention. It feels as though it is told in many different short stories that all come together to show the readers how everything started and how people survived the war.

Each chapter revolves around a different person who make a difference to the history of the war that happens. And in the end you come to understand how they all come together. This story was definitely engaging, I couldn't turn away from everything that was happening (I could imagine it happening in our world today). It's a scary book because of how much of it could ring true.

It was nice to see how humankind dealt with this war. Daniel has a perspective on how people will fight to save themselves. This was definitely an interesting read. I will definitely recommend this book!
Posted by Andrea @ Cozy Up at 10:30 AM