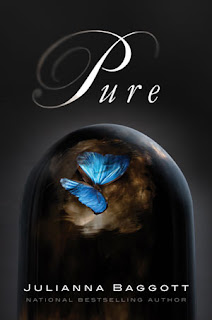 
We know you are here, our brothers and sisters . . .
Pressia barely remembers the Detonations or much about life during the Before. In her sleeping cabinet behind the rubble of an old barbershop where she lives with her grandfather, she thinks about what is lost-how the world went from amusement parks, movie theaters, birthday parties, fathers and mothers . . . to ash and dust, scars, permanent burns, and fused, damaged bodies. And now, at an age when everyone is required to turn themselves over to the militia to either be trained as a soldier or, if they are too damaged and weak, to be used as live targets, Pressia can no longer pretend to be small. Pressia is on the run.

Burn a Pure and Breathe the Ash . . .
There are those who escaped the apocalypse unmarked. Pures. They are tucked safely inside the Dome that protects their healthy, superior bodies. Yet Partridge, whose father is one of the most influential men in the Dome, feels isolated and lonely. Different. He thinks about loss-maybe just because his family is broken; his father is emotionally distant; his brother killed himself; and his mother never made it inside their shelter. Or maybe it's his claustrophobia: his feeling that this Dome has become a swaddling of intensely rigid order. So when a slipped phrase suggests his mother might still be alive, Partridge risks his life to leave the Dome to find her.

When Pressia meets Partridge, their worlds shatter all over again.

Wow, this book was nothing like I expected to be (in a good way). I wasn't really sure what this book was going to be like when I read the description but it caught my attention, and the cover is just absolutely beautiful. The idea of the fused bodies was actually really interesting, you really don't get much of an idea until you actually read the book, and I was absolutely blown away with the concept. Julianna really takes this story to a different level with the Pures and the Others.

Julianna does an amazing job of introducing this new world to her readers. She doesn't leave a lot of questions hanging about how things got as bad as they did. As the book moves ahead we get to learn more of what happened, and why these things happened. Not that the ending doesn't leave you with some questions (because it does). But Julianna does not leave you wondering why the world came to be.

What I really liked about this book is that you think you know what is happening and then Julianna pulls something out that completely blows your mind. I was not expecting what came out of this book at all and I actually really enjoyed it! Also there are snippets of action throughout the novel, but it takes awhile to get into those parts. When those parts come in, they are intense sections that are very well written. I felt like some of the parts just jump out at you.

I also have to add the fact that there is no love triangle in this story (Yay!) As much as I understand the love triangle obsession I like finding a book every once in awhile that doesn't have this added into it.

This book is a great addition to your collection, especially for those fans of dystopian novels. I can't wait to get my hands on a copy of this one. I want to know what happens next now! I will be recommending this book to everyone I talk to for sure!
Posted by Andrea @ Cozy Up at 10:00 AM