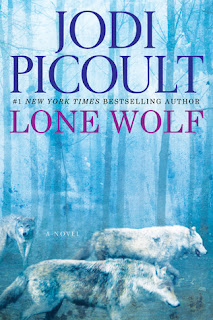 Edward Warren, twenty-four, has been living in for five years, a prodigal son who left his family after an irreparable fight with his father, Luke. But he gets a frantic phone call: His dad lies comatose, gravely injured in the same accident that has also injured his younger sister Cara.

With her father’s chances for recovery dwindling, Cara wants to wait for a miracle. But Edward wants to terminate life support and donate his father’s organs. Is he motivated by altruism, or revenge? And to what lengths will his sister go to stop him from making an irrevocable decision?

Lone Wolf explores the notion of family, and the love, protection and strength it’s meant to offer. But what if the hope that should sustain it, is the very thing that pulls it apart? Another tour de force from Jodi Picoult, Lone Wolf examines the wild and lonely terrain upon which love battles reason.

I have always been a fan of Jodi Picoult! Though her novels all have the same idea they are still quite different from one another and I always find myself drawn back to all the moral dilemmas she brings up in her books. Jodi Picoult really draws you into the story and makes you think about what you would do in certain situations, she's amazing!

What I really enjoy is how she uses different perspectives in her novels. I like to hear from all the different characters because I feel that I can connect with them easier by seeing how they think about things. And Jodi really does well with that in this new novel of hers. I really connected with Cara the most during her chapters because she really delves deep into her emotions about everything that happened in the past with her family. I did find that Edward's chapters were very drawn out and that it was difficult to connect with him because the way he was written seemed very standoffish. There were also some characters I felt didn't really need their own voice, it just seemed they were added in because they could be.

What I really enjoyed about this book is that Jodi brings a little mystery to her story, why did Edward leave, what was the fight about, and what happened to cause the accident. I really enjoyed going through the story and slowly getting the answers along with the other characters (like their mother) who know nothing about what happened.

What I really love about this book is the issue that Jodi deals with, the fight to terminate life support. What the reasons behind each child's choice is. All of Jodi's stories have some morality issue embedded inside, but this one is so different because this story is less about the moral issues and more about the family issues. She really pulls at your heartstrings seeing everything the family went through.

What I really enjoyed was Luke's chapters about the lives of wolves. Jodi did a lot of research on how wolves interact with one another and incorporated in her book in a way of showing family ties and the different ways family can be seen. It made for a really interesting read, and was definitely intriguing to learn more about the way wolves interact.

This was definitely an emotional read, especially in the end when you learn all the secrets of the family (I definitely found myself crying at the end of the book). I will always be a fan of Jodi Picoult's writing!
Posted by Andrea @ Cozy Up at 10:00 AM