Recap of the Anne Rice Event

Last night, I had the chance to hear the lovely Anne Rice, master of horror, talk about her venture back into the horror genre with her new book The Wolf Gift.

It started out waiting in a nice long line to get in. Where I finally got to meet Michele (Just A Lil' Lost) and Wendy (A Cupcake and A Latte), they ended up in line right behind me! So I got to pass the time chatting with them, which was lots of fun! We met up with Christa (Hooked on Books) and then waited for Anne Rice to come in. 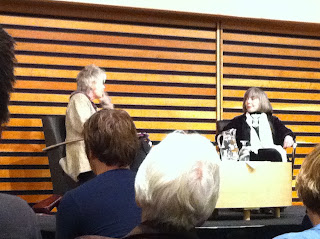 Anne Rice (on the right)

And then Anne Rice came up and started talking. This woman is absolutely hilarious, she had the audience laughing until they were crying with some of her comments ("I never thought to make my vampires sparkle in the daylight, then again my vampires couldn't go out in daylight"). It was interesting to hear Anne Rice talk about her "Queen of Facebook" status, mentioning that she wants to have vigorous conversations happening and she always goes through the comments that she receives to keep the conversation going. 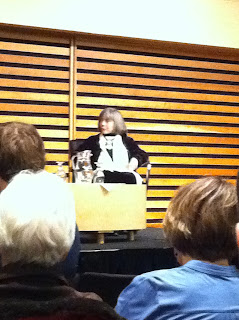 Anne Rice also talked a lot about her new book. She mentioned how she based the main character of Reuben off of Matt Bomer (a character from a show called "White Collar"). Most of her characters in other books are based on people she sees around (she said that she based a character off one guy she saw on a bus one day!) It was amazing to hear Anne talk about how passionate she is about her writing, and on why she never wrote about wolves before (her sister has a series out about wolves and she didn't want that to influence her writing).

Following the talk, we all got to wait in a long line up to get our books signed by Anne herself! Some pictures of Anne signing some books! 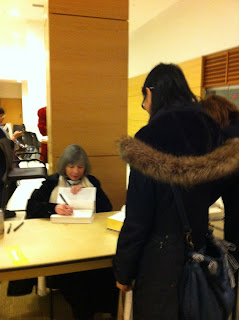 Michele getting her books signed 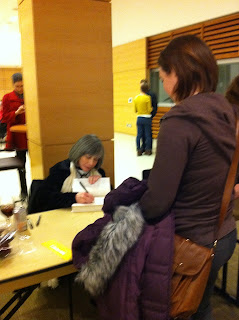 And Christa with her book. 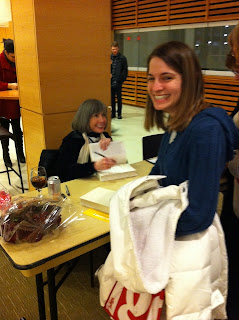 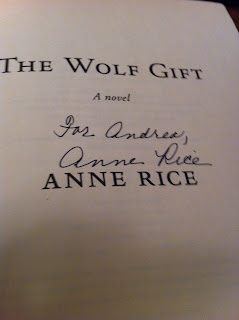 She has such neat handwriting!

It was such a fun event and I'm glad I was able to go. Can't wait to see what Anne does next for us!
Posted by Andrea @ Cozy Up at 7:36 PM