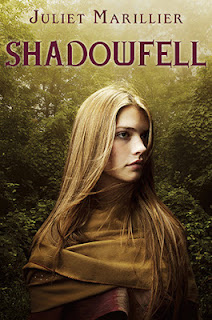 Its name is spoken only in whispers, if the people of Alban dare to speak it at all: Shadowfell. The training ground for rebels seeking to free their land from the grip of the tyrannical king is so shrouded in mystery that most believe it to be a myth.

But for Neryn, Shadowfell's existence is her only hope. She is penniless, orphaned, and utterly alone--and concealing a treacherous magical power that will warrant her immediate enslavement should it be revealed. She finds hope of allies in the Good Folk, fey beings whom she must pretend she cannot see and who taunt her with chatter of prophecies and tests, and in a striking, mysterious stranger, who saves her from certain death but whose motives remain unclear. She knows she should not trust anyone with her plans, but something within her longs to confide in him.

Will Neryn be forced to make the dangerous journey alone? She must reach Shadowfell, not only to avenge her family and salvage her own life, but to rescue Alban itself.

This book was just wow, I had so much fun reading it and I can't wait to check out more from Marillier now. Shadowfell is this secret place where rebels gather together but no one actually knows if it truly exists because no one speaks of this place. This book was such an adventure and I am so excited for book 2!

Neryn is alone, over time she has lost her family and her only hope is at Shadowfell, a place that she doesn't even know if it's just a tale or not. What I loved about Marillier's writing was that you could really feel the loss that Neryn dealt with. The guilt she carries with her and all the love for her family really shows through her thoughts and actions and I could really sympathize with her.

The world building was done amazingly well in this book as well, I could picture the woods and the little towns that Neryn passed through on her journey. This story is all about Neryn and her learning things about her power along her journey. This story does not have a romance line to it, but I do see it coming up later in the series, you can see the beginning of it at the end of the book, but for the most part this book is all about Neryn learning about herself.

Neryn is a character I am very quick to get behind, she has her issues and she is very slow in fully trusting someone with her secrets because of past experiences. This is a world where you have to watch everything you say in case you draw out the wrong question, everyone is on their toes because of this evil king ruling the land. Throughout the book I had issues trusting everyone that I met along with Neryn. She is very conscious of her safety and will make things up so that she is not suspected of anyone, but what I really loved about her was that even though she was concerned for her own safety she was also concerned for those around her. There are many times when she says to someone that she doesn't want them to follow her on her journey because it would put them in danger as well, so instead she decides to travel alone even though it would be better at times for her to have help.

The secondary characters were also so much fun. I loved the "Good Folk", Sage was my favourite she was so adorable and very much like a mother hen. The characters have so much confidence in Neryn and really help her realize many things.

This book was an adventure to read and all of the characters helped make this book what it was. There is no one that wasn't necessary in this story. Each and every person Neryn meets helps her journey in some way or another. This is one story that deserves so much love!
Posted by Andrea @ Cozy Up at 8:00 AM