Review: For Darkness Shows the Stars by Diana Peterfreund 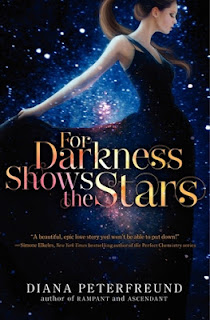 Publisher: Balzer and Bray
Series: For Darkness Shows the Stars #1

It's been several generations since a genetic experiment gone wrong caused the Reduction, decimating humanity and giving rise to a Luddite nobility who outlawed most technology.

Elliot North has always known her place in this world. Four years ago Elliot refused to run away with her childhood sweetheart, the servant Kai, choosing duty to her family's estate over love. Since then the world has changed: a new class of Post-Reductionists is jump-starting the wheel of progress, and Elliot's estate is foundering, forcing her to rent land to the mysterious Cloud Fleet, a group of shipbuilders that includes renowned explorer Captain Malakai Wentforth—an almost unrecognizable Kai. And while Elliot wonders if this could be their second chance, Kai seems determined to show Elliot exactly what she gave up when she let him go.

But Elliot soon discovers her old friend carries a secret—one that could change their society... or bring it to its knees. And again, she's faced with a choice: cling to what she's been raised to believe, or cast her lot with the only boy she's ever loved, even if she's lost him forever.

Inspired by Jane Austen's Persuasion, For Darkness Shows the Stars is a breathtaking romance about opening your mind to the future and your heart to the one person you know can break it.

Wow, how do I actually put this review into words. This book was so heartbreakingly beautiful that it is hard to actually write about it. I love the Austen novels that I have read so when I heard that this was based off Persuasion I know I needed to read it (even though that is one of the books I have yet to read). And this book is in my list of top books of the year, there were just so many emotions going through me while reading this book it was an amazing experience.

One thing that really made the book for me was the letters between Kai and Elliot, though readers hear about their story throughout the book, these letters give us the chance to experience their past ourselves. I was a little confused at times because the letters are not presented to readers in a chronological way, there is a lot of back and forth between many years, but you really get to see the change in the characters.

I really loved Elliot in this book. She knows what she believes in and she does everything to protect those she loves the most. Seeing what Elliot has to deal with on her own really makes her shine, she is strong and really tries to do her best while helping her family (not that they deserve it).

The romance in this book was beautifully written as well. Elliot and Kai were childhood friends but were on different sides of the fence, and now he is back with a huge chip on his shoulder. These two are so hot and cold around each other that you feel it when you're reading as well. Everything between these two is said between looks, there is barely any touching, which makes this romance even more heartbreaking.

This book has definitely made me want to read Persuasion with how beautiful the story was. I am so happy that I finally got to read this one! I'm also happy that the story of Kai and Elliot ends with this book, though it is part of a series, it's one that has other characters in the next book (I don't think it's necessary to read them in order)
Posted by Andrea @ Cozy Up at 8:00 AM