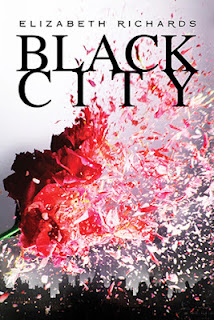 A dark and tender post-apocalyptic love story set in the aftermath of a bloody war.

In a city where humans and Darklings are now separated by a high wall and tensions between the two races still simmer after a terrible war, sixteen-year-olds Ash Fisher, a half-blood Darkling, and Natalie Buchanan, a human and the daughter of the Emissary, meet and do the unthinkable—they fall in love. Bonded by a mysterious connection that causes Ash’s long-dormant heart to beat, Ash and Natalie first deny and then struggle to fight their forbidden feelings for each other, knowing if they’re caught, they’ll be executed—but their feelings are too strong.

When Ash and Natalie then find themselves at the center of a deadly conspiracy that threatens to pull the humans and Darklings back into war, they must make hard choices that could result in both their deaths.

The whole vampire idea seems to have been overdone lately, so though I was excited about Black City I was also hesitant. Richards takes an old idea and makes it new again in this book. These are not regular vampires we are dealing with, they are called "Darklings" and each of them are unique in various ways (it was actually interesting reading about the different species of Darklings).

I really loved most of the characters right from the beginning, but my favourite by far was Day, she becomes Natalie's friend at school and she is just so sweet and adorable, and I could totally relate to her. I also don't think I would have liked Natalie as much as I did when she was around Day, she seemed a lot less selfish and stuck up (which was my first impression of Natalie). I actually found myself more interested in the secondary characters, the friendships between Natalie and Day and Beetle and Ash were fun and I wanted more of them together. Natalie also has a sister who I really hope there is more of, she has a tragic story and she is the one that is Natalie's anchor, I loved their scenes together.

I did enjoy how the romance between Ash and Natalie came about, it takes a bit of time to actually get to it, they really begin as this can't stand the idea of the other because they come from different worlds. Reading the scenes between these two in the beginning was fun because there was an edge to it and I always love when characters start out arguing. Though there is a bit of a love triangle in this book, I found it interesting how Richards brings out this idea of romance.

There is a big mystery behind Natalie's family, something happened to her father and it's continually mentioned but it's not until closer to the end that we find out the real details, and they are actually horrifying. There were quite a few scenes in this book that disturbed me, the ways a lot of the punishments were doled out, I just couldn't handle (but that didn't take away from the story in my opinion).

I've seen a few mixed reviews on this one, but I definitely enjoyed it, there were some interesting ideas thrown into the story and some twists that actually surprised me.
Posted by Andrea @ Cozy Up at 8:00 AM