Waiting on Wednesday is a weekly meme hosted by Breaking the Spine. This gives all bloggers a chance to talk about the books that they are most excited for to come on sale. 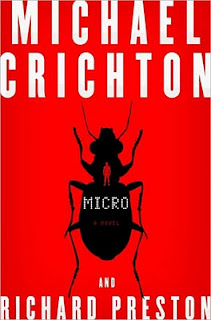 Goodreads Synopsis
Three men are found dead in the locked second-floor office of a Honolulu building, with no sign of struggle except for the ultrafine, razor-sharp cuts covering their bodies. The only clue left behind is a tiny bladed robot, nearly invisible to the human eye.

In the lush forests of Oahu, groundbreaking technology has ushered in a revolutionary era of biological prospecting. Trillions of microorganisms, tens of thousands of bacteria species, are being discovered; they are feeding a search for priceless drugs and applications on a scale beyond anything previously imagined.

In Cambridge, Massachusetts, seven graduate students at the forefront of their fields are recruited by a pioneering microbiology start-up. Nanigen MicroTechnologies dispatches the group to a mysterious lab in Hawaii, where they are promised access to tools that will open a whole new scientific frontier.

But once in the Oahu rain forest, the scientists are thrust into a hostile wilderness that reveals profound and surprising dangers at every turn. Armed only with their knowledge of the natural world, they find themselves prey to a technology of radical and unbridled power. To survive, they must harness the inherent forces of nature itself.

Why
I absolutely love anything by Michael Crichton. He was a great science fiction writer and could really capture a reader's attention. All the interesting science information he writes about, and add in the mystery. His books are amazing! Plus I would love to read his last book that he wrote (though it's sad).

What are you waiting for today?