Review - The Art of Fielding by David Harbach 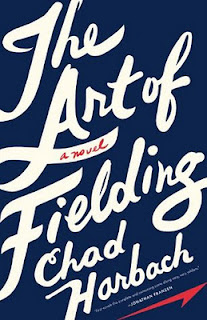 
At , a small school on the , baseball star Henry Skrimshander seems destined for big league stardom. But when a routine throw goes disastrously off course, the fates of five people are upended.

Henry's fight against self-doubt threatens to ruin his future. College president Guert Affenlight, a longtime bachelor, has fallen unexpectedly and helplessly in love. Owen Dunne, Henry's gay roommate and teammate, becomes caught up in a dangerous affair. Mike Schwartz, the Harpooners' team captain and Henry's best friend, realizes he has guided Henry's career at the expense of his own. And Pella Affenlight, Guert's daughter, returns to Westish after escaping an ill-fated marriage, determined to start a new life.

As the season counts down to its climactic final game, these five are forced to confront their deepest hopes, anxieties, and secrets. In the process they forge new bonds, and help one another find their true paths.

I really enjoyed this book. It is a lot like Moby Dick, in the fact that it's a story about baseball yet at the same time it's so much more than that, just like Moby Dick is so much more than just a story about a fish. There are so many great aspects about this book including the characters. I've read a lot of books but have never really found a book with such eccentric characters who are still so real (some of the characters reminded me of people I know in my life). I found this book heartwarming and it is definitely on my list of books to re-read in the future. It shows that one incident can change so many lives at once and that people are connected in more ways than they believe.

This book brought up the questions in my mind, how much ambition is too much, and how hard should you work before it's too much? I like that a book can me think about things in my own life and it teaches me to take things one day at a time and not to put too much stock in anything. I loved that this book brought together sports and literature in such an inspiring story, and the way that Chad uses literature in a romantic way at times. The story is so full of literary allusions that it made it that much better for me (I love when books reference other literary stories). I found that at times I was not expecting what would come next. I like being surprised and not being able to predict everything that happens (not saying that I didn't see a few things coming here and there).

Chad Harbach has done a great job in entertaining his readers with this story. For being a first novel, I think this book really does well and I hope to see more stories from Chad in the future. This story is funny, and sad at times, yet completely heartwarming in the end.
Posted by Andrea @ Cozy Up at 3:38 PM