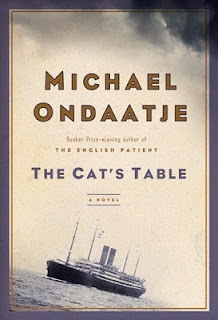 In the early 1950s, an eleven-year-old boy boards a huge liner bound for England. At mealtimes, he is placed at the lowly "Cat's Table" with an eccentric and unforgettable group of grownups and two other boys. As the ship makes its way across the Indian Ocean, through the Suez Canal, into the Mediterranean, the boys find themselves immersed in the worlds and stories of the adults around them. At night they spy on a shackled prisoner -- his crime and fate a galvanizing mystery that will haunt them forever.

Looking back from deep within adulthood, and gradually moving back and forth from the decks and holds of the ship to the years that follow the narrator unfolds a spellbinding and layered tale about the magical, often forbidden discoveries of childhood and the burdens of earned understanding, about a life-long journey that began unexpectedly with a sea voyage.

Ever wonder what  it would be like to be a child with no parents around watching over your every move. This is a dream to every child (it is still my dream and I am 22). I enjoyed imagining myself on the ship taking part in all the different adventures, feeling free knowing that it's easier to get away with things.

I am not usually a fan of books that do not focus on a plot throughout the story and jump around all over the place, but I was pleasantly surprised with this book! I really enjoyed how Michael takes his readers on an adventure meeting all these different characters with so many little quirks to them.

I found this book was a little like short stories being put together but all connecting with one another, and it was really interesting to read and connect the different narrators (the young one on the ship, and the character in the present... years after). I love that Ondaatje doesn't overtake the book with descriptions of everything, he really lets the reader think for themselves... I hate when everything is described so that you don't get to have your own picture in your mind!

Michael did a great job taking his readers on this adventure with his character (also named Michael). This is definitely not a typical coming-of-age story that a reader would normally get that takes you through his life and the past describes his future, this story just brings two different versions of a character together, but the reader does not get a big explanation as to the adventures of the younger version being an influence on the older versions life. Everything just slowly comes together on it's own. A definite literary novel! This book was beautifully written and I can't wait for Michael to take me on a new adventure in the future.

Other Books By Michael Ondaatje:
The English Patient
Anil's Ghost
Divisadero
Posted by Andrea @ Cozy Up at 1:31 PM