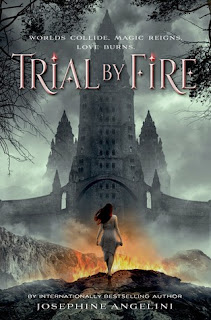 This world is trying to kill Lily Proctor. Her life-threatening allergies keep her from enjoying experiences that others in her hometown of take for granted, which is why she is determined to enjoy her first high school party with her best friend and longtime crush, Tristan. But after a humiliating incident in front of half her graduating class, Lily wishes she could just disappear.

Suddenly, Lily is in a different —one overrun with horrifying creatures and ruled by powerful women called Crucibles. Strongest and cruelest of them all is Lillian . . . Lily's other self in this alternate universe.

What makes Lily weak at home is what makes her extraordinary in New Salem. In this confusing world, Lily is torn between responsibilities she can't hope to shoulder alone and a love she never expected.

I have to say that I have a thing for witch books for some reason, and reading about this book had me interested. I really liked the idea behind this book, Lily mysteriously finds herself in alternate universe, similar to hers in ways but still so different. I felt that Josephine Angelini took the idea of multiple universes to a great level, Lily travels to this new Salem and finds that her self in this world is a completely different person.

Lily finds herself in a dark universe, but her life truly changes when she is brought into New Salem, whereas in her old universe, her health was life-threatening, she is a strong character in the new universe. Lily has a lot to learn about this new place she has fallen into, she is taught about the magical abilities of the Crucibles and how they rule this universe. I really liked the slow world building that Angelini has going, Lily slowly learns who has the power in this world and how everything is controlled. She quickly learns that she has been placed in the middle of a war and that she must choose which side she will work with. I really liked Lily's character, she is tough and yet you can see that she is scared about being in this new place, but she is very determined to do anything she can to get home.

I am interested to know more about the group of rebels that take Lily under their wing and help her learn her magical potential. Readers slowly get a bit of their history of how they came together and why they chose this path. I truly enjoyed the build up, especially between Lily and Rowan, they have a great dynamic with one another, and I really liked how their relationship grew and they began to truly trust one another.

Angelini has created a very dark world where no one is safe no matter where you are, there is danger lurking around every corner. This book opens up a new world and has readers on the edge of their seat by the end, Angelini leaves you wanting more, the ending leaves many unanswered questions about Lily and what she will do now that she has done so much.
Posted by Andrea @ Cozy Up at 6:00 AM