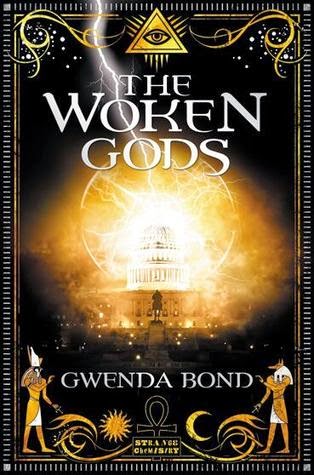 Ten years ago, the gods of ancient mythology awoke all around the world.

The more things stay the same…

This morning, seventeen-year-old Kyra Locke was late for school.

But that’s not out of the ordinary in a transformed , dominated by the embassies of divine pantheons and watched over by the mysterious Society of the Sun that governs mankind’s relations with the gods. What is unusual is Kyra’s encounter with two trickster gods on her way home, one offering a threat, and the other a warning.

Kyra escapes with the aid of young operatives from the Society, who inform her that her scholarly father has disappeared from its headquarters at the Library of Congress and taken a dangerous Egyptian relic with him. The Society needs the item back, and they aren’t interested in Kyra’s protests that she knows nothing about it.

Now Kyra must depend on her wits and the help of everyone from a paranoid ex-boyfriend to scary Sumerian gods to operatives whose allegiance is first and always to the Society. She has no choice if she’s going to clear her father’s name and recover the missing relic before the impending summer solstice.

What’s at stake? Just the end of the world as Kyra knows it.

I had a bit of a love/hate relationship with this book while reading it, there were a lot of interesting things to it, especially the mythology behind all the gods, but I had some trouble really getting into the story. There were a lot of great ideas but I felt it needed to be thought through a little more.

The world in this story is an interesting one where gods roam the Earth among humans, though people try very hard to avoid these spirits, and there is one group that works to keep the peace, the Society of the Sun. I wanted to learn a little bit more of the Society, I felt like this was one area that fell behind to the story of Kyra. The Society is a place where people collect ruins from the gods, and are trained to protect humans from the evil that these divine creatures can cause, and readers learn that people are brought into this place through family ties. But I wanted a little more history to understand everything that they do.

I sometimes enjoyed Kyra's characteristics and sometimes found her to get on my nerves, she has a lot of secrets that she holds close, really changing who she is as a person. I had a problem getting around her attitude sometimes, but as I learned more about her and her situation (especially with her family) I can understand why she keeps things to herself so much. Kyra definitely has a fire to her that makes her ready to fight for her family and what she believes in. I respected Kyra's thoughts that even though she has had issues with her family, she will do anything for them.

Honestly, this was a fun book with an interesting storyline, but I just felt like it needed a little more to amp it up. I am sad to see Strange Chemistry closed down because I think Gwenda Bond can add more to this story with more books to come and I hope to see her write more with someone else.
Posted by Andrea @ Cozy Up at 7:00 AM