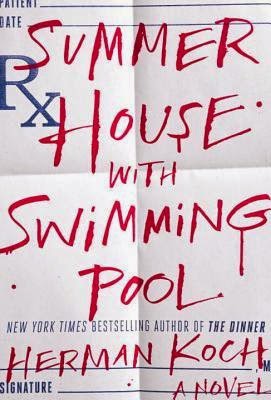 When a medical procedure goes horribly wrong and famous actor Ralph Meier winds up dead, Dr. Marc Schlosser needs to come up with some answers. After all, reputation is everything in this business. Personally, he’s not exactly upset that Ralph is gone, but as a high profile doctor to the stars, Marc can’t hide from the truth forever.

It all started the previous summer. Marc, his wife, and their two beautiful teenage daughters agreed to spend a week at the Meier’s extravagant summer home on the . Joined by Ralph and his striking wife Judith, her mother, and film director Stanley Forbes and his much younger girlfriend, the large group settles in for days of sunshine, wine tasting, and trips to the beach. But when a violent incident disrupts the idyll, darker motivations are revealed, and suddenly no one can be trusted. As the ultimate holiday soon turns into a nightmare, the circumstances surrounding Ralph’s later death begin to reveal the disturbing reality behind that summer’s tragedy.

Featuring the razor-sharp humor and acute psychological insight that made The Dinner an international phenomenon, Summer House with Swimming Pool is a controversial, thought-provoking novel that showcases Herman Koch at his finest.
,
My Review:

I remember hearing everyone talk about Herman Koch's The Dinner when it came out last year, it was one of those books that you wanted to talk about to everyone but they needed to read it or else you would give too much away. So when I heard that another one of his books was being translated, I knew I would jump at the chance to read it. Summer House with Swimming Pool, is another book that will leave readers reeling and wanting to talk about it with anyone that has already read it.

This book is a lot like the first one, where there is an event that is alluded to and as a reader you see some of the fallout from this event, and then the story goes back to the past and shows what leads up to this drastic thing. This is another story that really needs to be experienced and is hard to review because I don't want to give away major plot spoilers.

I can say that Herman Koch is amazing at creating characters that you are meant to dislike, each one of them has their own issues and really do not have redeeming characteristics. But these are the things that really make the story so intriguing and had me picking up the book whenever I could. This book is very controversial and makes you think about what path you would take if you were in that situation, it is one of those things a person can judge but can never really say what it is like until they experience it for themselves.

If you haven't read anything by Koch yet I definitely suggest a binge read (hopefully more of his books will be translated over the next few years).  They deal with disturbing subject matter, but the way Koch writes pulls readers into the story and keeps a strong hold on you until the very end.
Posted by Andrea @ Cozy Up at 7:00 AM