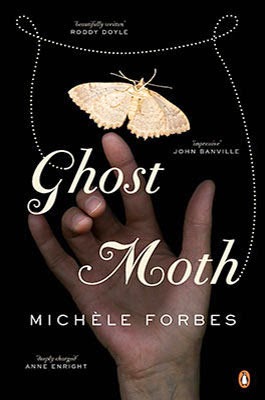 During the hot Irish summer of 1969, tensions rise in , where Katherine, a former actress, and George, a firefighter, struggle to keep buried secrets from destroying their marriage. In this emotionally acute debut novel, Michèle Forbes immerses the reader in a colourful tapestry of life. Throughout the book’s care­fully woven story, the bonds of family are tested and forgiveness is made possible through two parents’ indomitable love for their children.

An exploration of memory, childhood, illicit love, and loss, Ghost Moth portrays ordinary experiences as portals to rich internal landscapes: a summer fair held by children in a backyard garden exposes the pangs and confusion of a first crush; a lonely tailor who is hired by an amateur theatre production of Bizet’s Carmen puts so much careful attention into the creation of a costume for his lover that it’s as if his desire for her can be seen sewn into the fabric. All the while, moves to the brink of civil war. As Catholic Republicans and Protestant Loyalists clash during the “Troubles,” the lines between private anguish and public outrage disintegrate in this exceptional tale about a family—and country—seeking freedom from ghosts of the past.

This is a book that I remember being very interested in, but when it came time to reading it, I didn't remember much of what it was about, and I really enjoyed that fact. Though I will say that I still had some difficulties understanding exactly what was going on,  the setting of the tensions in Belfast confused for me for the first bit of the book, until I started getting actual details on what was going on (but it took a bit too much time to get into that information).

This story was definitely a colorful one, where readers see the trouble that two people can work through when they are truly in love. This story is told through the voice of Katherine, as she remembers a time in her past when she fell in love and how that experience affected her future. Michele Forbes definitely has an interesting picture to portray of showing how love can surprise us at the most unsuspecting of times. I will say I wanted to see a little more of George and see how he really felt about everything that was happening, he seemed to be out of the picture a little too much for my liking.

The one thing that would have been interesting to see more of (though may not necessarily have added that much to the story) was of the civil war in Ireland. After reading the synopsis I would have expected that to have a little more impact on the story of Katherine, but it was very much on the sidelines to the story of her past. I think the children's lives were impacted a lot by these "Troubles" but that it was not shown to readers as much.

In all honesty, this story could have been longer and had a bit more added in to really make the story, though it was still a beautiful read. I enjoyed the characters and seeing how one tiny thing can change the future in such a large way. Yet these two characters, Katherine and George have been through so much and their love really shines through. This story is truly a testament to who will truly be there for you when you are going through your toughest moments, and how love does conquer all.
Posted by Andrea @ Cozy Up at 7:00 AM