Review: The End or Something Like That by Ann Dee Ellis 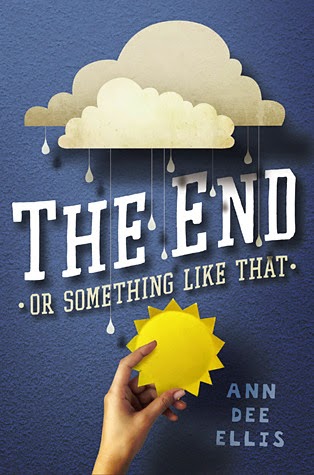 Release Date: May 1, 2014
Buy From Amazon.ca / Buy From Chapters.ca /
Buy From BookDepository.com

For fans of Sara Zarr and Stephen Chbosky, an achingly raw and surprisingly funny novel about coping with loss

Emmy’s best friend Kim had promised to visit from the afterlife after she died. But so far Kim hasn’t shown up even once. Emmy blames herself for not believing hard enough. Finally, as the one-year anniversary of Kim's death approaches, Emmy is visited by a ghost—but it’s not Kim. It’s Emmy’s awful dead science teacher.

Emmy can’t help but think that she's failed at being a true friend. But as more ghosts appear, she starts to realize that she's not alone in her pain. Kim would have wanted her to move forward—and to do that, Emmy needs to start letting go.

This is a book that I really wanted to love, the synopsis really caught my attention and made me look forward to reading a story about someone dealing with loss. By the end, I felt that something was missing throughout the story and that maybe it was a little too short for everything that I was hoping for.

This story moves back and forth from now (a year after Emmy's friend has died and her still dealing with the aftermath) and before, as we see how these two were with one another right before she passed away. I felt like through these two different versions of Emmy, what she is really like got lost in there somewhere, it seems like Emmy's character revolves around her friend Kim no matter what. I wanted to get to know Emmy a little better, though I can say that Ann Dee Ellis does a great job dealing with the situation of loss in this story.

I thought the idea of seeing these ghosts was an interesting one, all Emmy wants to see is Kim one last time and yet she sees all these other people that don't matter instead. Emmy wants to move forward but all she can think about is being there for Kim, like they had planned, but in order to really move on she needs to let go of everything that is really affecting her. Emmy misses out on a lot of things because she is dwelling on how things were when Kim passed away, she doesn't really have many other friends and she is very much on her own.

I did like how as the story continues, Emmy does begin to grow a bit more and understand that she needs to let go and that life continues on after death. It takes her a lot of time, because she is still intent on seeing Kim's ghost at least once. I do think this is a good book for teens dealing with loss, helping them understand how to move on, I just think it did not work for me because I am older, the writing is very much geared towards a younger audience I believe.
Posted by Andrea @ Cozy Up at 7:00 AM