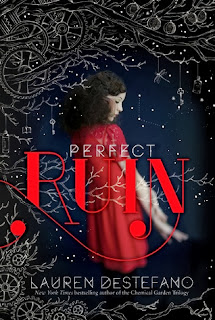 Received: Received a copy from Simon and Schuster Canada in exchange for an honest review

On Internment, the floating island in the clouds where 16-year-old Morgan Stockhour lives, getting too close to the edge can lead to madness. Even though Morgan's older brother, Lex, was a Jumper, Morgan vows never to end up like him. She tries her best not to mind that her life is orderly and boring, and if she ever wonders about the ground, and why it is forbidden, she takes solace in best friend Pen and her betrothed, Basil.

Then a murder, the first in a generation, rocks the city. With whispers swirling and fear on the wind, Morgan can no longer stop herself from investigating, especially when she meets Judas. He is the boy being blamed for the murder — betrothed to the victim — but Morgan is convinced of his innocence. Secrets lay at the heart of Internment, but nothing can prepare Morgan for what she will find — or who she will lose.

I have been really interested to read Lauren DeStefano's newest book, I've heard so many great things, and though I didn't absolutely love the Wither series, there was a lot that I can see Lauren going places. This book sounded different and very interesting, kind of dystopian with a bit of a different twist to it. I can say that I enjoyed this book a lot more and am really excited about what comes next in the series.

I really liked the characters in this book, especially Morgan. I love characters that question everything around them, it shows that they are intelligent and are aware of their surroundings. They don't just automatically believe that everything is as it should be. Morgan grew up always asking questions, but when things start to go wrong on their island she starts to see things differently. She starts investigating her so called perfect life and begins to find more flaws that just make her long for the ground even more.

I really liked the secondary characters as well in this book, they all had a reason for being there. The relationship between Pen and Morgan is great, two complete opposite girls who become best friends and share everything with one another. Pen is the one who helps to ground Morgan a little more when she goes off on tangents, and yet at the same time they help each other get into trouble as well. Also the relationship with Basil, I'm not usually a fan of books that pick out the betrothed of the character for them, but I think in this instance it worked for the book (we will see where the rest of the series go though). These two grew up together, and you can really see the love they feel for one another, especially when Morgan finally beings to trust Basil with some secrets, this is a relationship that you can see happening even  if they weren't put together.

I do think that there still needs to be a little more background to really understand the history of Internment, there is mention of it in the beginning of the book and about the gods throughout, but I wanted a little more explanation about the gods. At times I felt like I was missing something (and then again maybe I read over it as well). The ending definitely leaves me wanting to come back for more to find out how Morgan and her group will deal with everything that has happened. I can say that I think Lauren has definitely grown in her writing with this story and I hope the story keeps going at the rate it is.
Posted by Andrea @ Cozy Up at 6:00 AM