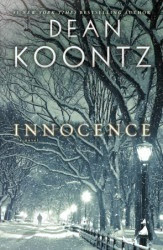 He lives in solitude beneath the city, an exile from society, which will destroy him if he is ever seen.

She dwells in seclusion, a fugitive from enemies who will do her harm if she is ever found.

But the bond between them runs deeper than the tragedies that have scarred their lives. Something more than chance—and nothing less than destiny—has brought them together in a world whose hour of reckoning is fast approaching.

In Innocence, #1 New York Times bestselling author Dean Koontz blends mystery, suspense, and acute insight into the human soul in a masterfully told tale that will resonate with readers forever.

So I completely admit that I am usually more of a Stephen King fan but I have liked a lot of Dean Koontz stories as well, he definitely knows how to write creepy. Reading about this new book of his got me interested, it sounds different than his books that I have read in the past, and honestly after finishing this book I can say it was a great story that makes you think.

The title depicts the book amazingly well, there is so much innocence especially the lives of the characters. I really loved how these two characters came together and learned from one another. Their relationship is an interesting one as they each set parameters for the other, one hates to be touched and the other seen, and yet they work together in a troubled time working around these issues. In a way they are both troubled and that's really what brings them together is their problems with the outside world and how they are used to seclusion, and now they understand how to rely on someone else after being alone.

Though I found this book not to have the horror that I was thinking a Dean Koontz book would have he still adds creepiness to the story. The female character's enemies will stop at nothing to get to her, and the way Koontz writes these characters will give many readers shivers thinking about the kind of people they are. I honestly found myself disturbed at times with the way these people thought and the things they did to get what they wanted.

Dean Koontz uses this book to really look into the human soul and really show how the way people look does not always define who they are. Addison is such an amazing character, it takes some time to really understand everything about him, the story switches back and forth from his past to present, to really help readers see what he has been through in his life. Through so much trouble, Addison still wants to see the good in people and he is such an innocent person.

This is one book I would recommend people to read, it is not a normal Dean Koontz book (at least that I am used to, though I will check out more of his past ones now). This book has a lot of heart to it and characters that you love despite the hate that follows them.
Posted by Andrea @ Cozy Up at 6:00 AM