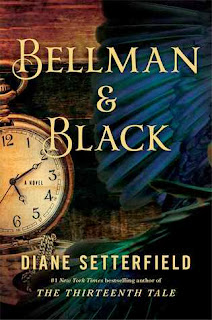 Bellman & Black is a heart-thumpingly perfect ghost story, beautifully and irresistibly written, its ratcheting tension exquisitely calibrated line by line. Its hero is William Bellman, who, as a boy of 11, killed a shiny black rook with a catapult, and who grew up to be someone, his neighbours think, who "could go to the good or the bad." And indeed, although William Bellman's life at first seems blessed—he has a happy marriage to a beautiful woman, becomes father to a brood of bright, strong children, and thrives in business—one by one, people around him die. And at each funeral, he is startled to see a strange man in black, smiling at him. At first, the dead are distant relatives, but eventually his own children die, and then his wife, leaving behind only one child, his favourite, Dora. Unhinged by grief, William gets drunk and stumbles to his wife's fresh grave—and who should be there waiting, but the smiling stranger in black. The stranger has a proposition for William—a mysterious business called "Bellman & Black" . . .

This is a story about William Bellman, who at the beginning is just a small boy and we follow him as he grows up and his life changes. William is someone who people see as a hard worker and very smart and he shows that off well, he impresses his superiors at work and eventually he takes the business higher. Throughout his life though, there is a ghost that is following him and yet you are not sure who this person is, he is referred to as Mr. Black.

This Mr. Black gives the entire book a great creepy feel to it, and I loved the mystery around him. William's life changes through many deaths, he loses almost everyone he loves and after an interesting proposition from Mr. Black, William works hard to make this business happen. I love seeing William's determination to make something successful. He works around the clock and is always there to help, his life ends up revolving around his work.

This book really shows how one person can rise through a lot of adversity and really make a name for himself. He comes up with such a smart way to make money, this business "Bellman & Black" is one that is easy to cash in on. It's impressive how hard William works to have everything and in a way he does get everything that matters. Readers get to see William enjoy a successful life though he misses out on a lot because of the time he must put into his work.

The ending really brought things full circle, I will admit I would have liked a little more of this Mr. Black but I think his presence really brought out William's character more. This mysterious Mr. Black made William work harder, I admire William for his work ethic, but he is someone who needs to understand the difference between work and life and not merge the two. He ends up living at work and missing out on his daughter's life, and eventually his work begins to resemble his life.

I really enjoyed the mysterious aspect of this book but I wanted a little more to the creepy and to Mr. Black. Though his presence is always lurking he was just that, a presence. All in all, this was definitely an interesting book and I think in a way William is a brilliant character.
Posted by Andrea @ Cozy Up at 6:00 AM