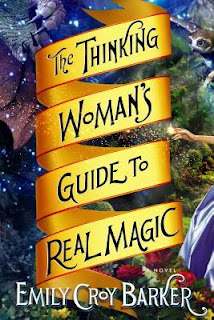 Nora Fischer’s dissertation is stalled and her boyfriend is about to marry another woman.  During a miserable weekend at a friend’s wedding, Nora wanders off and walks through a portal into a different world where she’s transformed from a drab grad student into a stunning beauty.  Before long, she has a set of glamorous new friends and her romance with gorgeous, masterful Raclin is heating up. It’s almost too good to be true.

Then the elegant veneer shatters. Nora’s new fantasy world turns darker, a fairy tale gone incredibly wrong. Making it here will take skills Nora never learned in graduate school. Her only real ally—and a reluctant one at that—is the magician Aruendiel, a grim, reclusive figure with a biting tongue and a shrouded past. And it will take her becoming Aruendiel’s student—and learning magic herself—to survive. When a passage home finally opens, Nora must weigh her "real life" against the dangerous power of love and magic.

I love books that deal with magic, and the cover of this book really drew me in, it's so colourful which I absolutely love because it draws the eye in. I was definitely intrigued with the idea of the story, an alternative world that consists of magicians and fairies, Nora has definitely gotten herself into an interesting dilemma.

I have to say that I did not like Nora when I first met her in the story, she seemed like a character that always felt sorry for herself. I do think Nora grew on me (there was a lot of time to get used to her thinking). I really liked that she was ambitious, and kept pushing Aruendiel to teach her magic. Emily Croy Barker has a very interesting take on magic and how the characters learn to use the magic to control the different elements. It is all about connecting with the object/element and feeling it, I feel that in a way it could be transferred into real life situations, really connecting with things.

Aruendiel was by far my favourite character, I immediately liked him wanted more of him. His background history was intriguing, and readers slowly learn what caused Aruendiel to be like he is now, there are so many secrets that you need to keep reading if only to find out more about this closed off character. The interactions between him and Nora were great, Nora would not stand to be some meek little thing, she tries to take care of herself instead of just going along with what everyone says.

The one small thing that got me with this book is that it felt very drawn out, I think it was a bit too long for my liking. Though I had fun reading the story, it took me longer than usual to read, I felt there were times where things happened that didn't really need to. Almost like the book could have been cut down about 100 pages and it would still work just as well.

Overall, I found this to be a fun book, the characters were interesting, and Barker is very creative with this alternate world she has written. The one thing that really caught my attention was the many mentions of Pride and Prejudice, you can see that Emily Barker drew from it in a few places and I really thought that added to the story.