Review: The Bookstore by Deborah Meyler 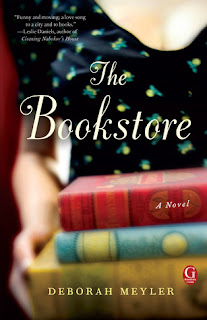 A witty, sharply observed debut novel about a young woman who finds unexpected salvation while working in a quirky used bookstore in Manhattan.Impressionable and idealistic, Esme Garland is a young British woman who finds herself studying art history in . She loves her apartment and is passionate about the city and her boyfriend; her future couldn’t look brighter. Until she finds out that she’s pregnant.

Esme’s boyfriend, Mitchell van Leuven, is old-money rich, handsome, successful, and irretrievably damaged. When he dumps Esme—just before she tries to tell him about the baby—she resolves to manage alone. She will keep the child and her scholarship, while finding a part-time job to make ends meet. But that is easier said than done, especially on a student visa.

The Owl is a shabby, second-hand bookstore on the Upper West Side, an all-day, all-night haven for a colorful crew of characters: handsome and taciturn guitar player Luke; Chester, who hyperventilates at the mention of Lolita; George, the owner, who lives on protein shakes and idealism; and a motley company of the timeless, the tactless, and the homeless. The Owl becomes a nexus of good in a difficult world for Esme—but will it be enough to sustain her? Even when Mitchell, repentant and charming, comes back on the scene?

A rousing celebration of books, of the shops where they are sold, and of the people who work, read, and live in them, The Bookstore is also a story about emotional discovery, the complex choices we all face, and the accidental inspirations that make a life worth the reading.

So this book obviously appealed to me because of the cover and the title, something about a book that revolves around a bookstore will always have me wanting to read it. I enjoyed the quirkiness of the used bookstore and the characters that are entwined with the bookstore, it was adorable and is definitely a place I would love to have around here, but for me that was the most enjoyable thing about this story.

My main problem with the story was the characters, I could not get behind any of their decisions or the way they acted. Although Esme's character grows up by the end of the novel and really starts having a different view on life, but I just could not get behind any of her decisions through the story that got her where she ends up. I found Esme to be too naive about things and that she never really stood up for herself. Mitchell's character was just a complete jerk the entire time and I hated that Esme would fall for his sweet talk all the time.

The characters that I did really love, like Esme's neighbour and George, the owner of the bookstore, were barely in the novel. Esme's neighbour is the type of person that tells it like it is, she would be there to help Esme with anything and yet she should have been in the story more. She was the voice of reason for Esme and she needed to be there for Esme to talk through more things with.

I also went into this book thinking that the bookstore itself would be more than what it was. Yes, it's the place that Esme really finds herself and begins a new life there. I will say that all the characters associated with the bookstore actually kind of made me interested in reading more just because they were so unique and it was like a special family.

The story itself also felt like it dragged on for too long and the conclusion left me wanting a little more from Esme. I really needed more from the characters to have been able to really enjoy the story. Sadly, this book did not end up being one for me.
Posted by Andrea @ Cozy Up at 6:00 AM