Review: Half Lives by Sara Grant 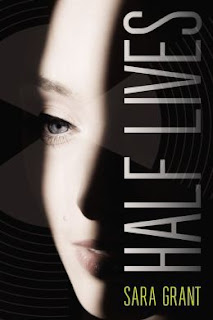 I learned that surviving isn't all it's cracked up to be. If you survive, you've got to live with the guilt, and that's more difficult than looking someone in the eye and pulling the trigger. Trust me. I've done both. Killing takes a twitch of the finger. Absolution takes several lifetimes.

Seventeen-year-old Icie's parents have given her $10,000 in cash, a map of a top-secret bunker, and instructions to get there by any means necessary. They have news of an imminent viral attack and know that the bunker is Icie's only hope for survival. Along with three other teens, she lives locked away for months, not knowing what's happening in the outside world or who has survived. And are they safe in the bunker after all?

Generations in the future, a mysterious cult worships the very mountain where Icie's secret bunker was built. They never leave the mountain, they're ruled by a teenager...and they have surprising ties to Icie.

This high-stakes, original, and thought-provoking adventure from Sara Grant follows two unlikely heroes, hundreds of years apart, as they fight to survive.

I was definitely intrigued with this book when I first picked it up, the idea of surviving a viral attack on the country by hiding out in an underground bunker really peaked my interest. This is one of those books that is about surviving however you can and doing anything possible to stay alive. I love survival books because they feel so real, though I was a little disappointed at how this book ultimately played out.

This book is told from many perspectives, first is Icie's, and what she goes through getting to the bunker and how she survives in the bunker with these others that she has met along the way. In between there are four other narratives from the future after the attack and what they are doing to survive and learning what they have been taught (these are the sections that I had trouble with).

Where I had issues was really understanding how far in the future these other characters are, and also understanding their thought processes. They are almost like a cult that worships a being that we are unsure of. I felt disconnected from these characters and really couldn't follow their understanding of the world. Throughout the book I was more interested in Icie's perspective, I loved the realistic aspect of trying to survive. Sara Grant does a great job showing the fear of death and yet also shows that there is a time where you feel it may just be easier to give up than struggle through anymore.

I enjoyed parts of this book, but I felt confused for half of it, I needed more answers about how things came to be for this future generation. The ending tried to tie these two things up but I was still unsure of who many of the characters were and it was a little disappointing for me. I think I would have enjoyed this book more if it was focused mainly on Icie's perspective rather than the adding in the future generation.