Review: The Palace of Curiosities by Rosie Garland 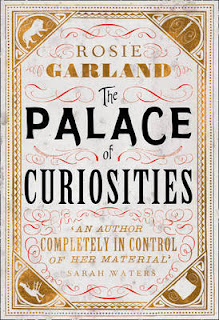 A luminous and bewitching debut novel that is perfect for fans of Angela Carter. Set in Victorian London, it follows the fortunes of Eve, the Lion-Faced Girl and Abel, the Flayed Man. A magical realism delight. Before Eve is born, her mother goes to the circus. She buys a penny twist of coloured sugar and settles down to watch the heart-stopping main attraction: a lion, billed as a monster from the savage heart of Africa, forged in the heat of a merciless sun. Mama swears she hears the lion sigh, just before it leaps...and when Eve is born, the story goes, she didn't cry - she meowed and licked her paws.

When Abel is pulled from the stinking Thames, the mudlarks are sure he is long dead. As they search his pockets to divvy up the treasure, his eyes crack open and he coughs up a stream of black water. But how has he survived a week in that thick stew of human waste?

Cast out by Victorian society, Eve and Abel find succour from an unlikely source. They will become The Lion Faced Girl and The Flayed Man, star performers in Professor Josiah Arroner's Palace of Curiosities. And there begins a journey that will entwine their fates forever.

This book has been compared a little to THE NIGHT CIRCUS (which I have yet to read, but am definitely intrigued by), so naturally I picked this one up as soon as it was on shelves. I have been loving these books that deal with circuses and just weird things in general lately, so this one definitely was one I could not let sit around for too long. I have to say I have a lot of love for this cover as well, there isn't too much going on, but  it's got this shine that really draws you in.

The book switches POV between Eve and Abel, so that we really get to see what brought each of them to where they are now and we get their history before taking part in Josiah's Palace of Curiosities. I love a story that is so character driven like THE PALACE OF CURIOSITIES is, you really get into the minds of these two and understand all they are feeling. I was always more interested in Abel's story because he doesn't know his own history and always forgets his life when he falls asleep. I found this story to be so intriguing, and I love slowly learning about a character as they learn about themselves as well.

Eve's character is different and the way she is written, makes it easy for readers to sympathize with her. She grew up being kept in the house and away from people because of her looks (she is covered in hair), and she has no contact with anyone other than her mother. This makes her very sheltered and the first person that offers her a kind hand she immediately believes to be love. I really wanted Eve to have happiness and I love how as more characters are introduced, we finally see Eve making friends with people who really care for her.

I will say that I felt like the book moved slow in the beginning, because Rosie Garland takes the time to let us get to know the characters, and then it seems like there is a certain part where everything starts moving faster (around the time the characters join "The Palace of Curiosities"). I wanted a little more interaction between Eve and Abel when they do finally come together. The ending was adorable and really made me love these two characters even more. This book was definitely a gem and brought something different to me.
Posted by Andrea @ Cozy Up at 10:24 AM