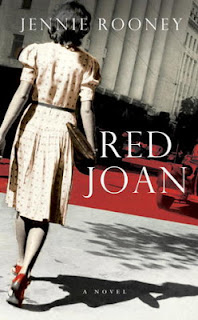 Release Date: May 21, 2013
Buy From Amazon.ca / Buy From Chapters.ca /
Buy From BookDepository.com

Joan's voice is almost a whisper. 'Nobody talked about what they did during the war. We all knew we weren't allowed to.'

Joan Stanley has a secret.

She is a loving mother, a doting grandmother, and leads a quiet, unremarkable life in the suburbs. Then one morning there is a knock on the door, and suddenly the past she has been so keen to hide for the last fifty years threatens to overturn her comfortable world.

Cambridge University in 1937 is awash with ideas and idealists, yet unworldly Joan feels better suited to a science lecture and a cup of cocoa. But a chance meeting with the glamorous Russian-born Sonya and her charismatic cousin Leo blurs the edges of the things Joan thought she knew about the world, and about herself.

In the post-War world of smoke and mirrors, allegiance is a slippery thing. Working in a government ministry with access to top-secret information, Joan is suddenly faced with the most difficult question of all: what price would you pay to remain true to what you believe? Would you betray your country, your family, even the man you love?

When I finished this book the first thing that came to my mind was how this was reminiscent of an Ian McEwan story, and I absolutely love his writing. There was so much to this story and I was so engrossed in Joan's story, that I didn't want this to end. The story opens up with Joan reading about the death of someone from her past and at this point her past comes back and is close to ruining her life.

The way this story is written is that Joan is telling the story of her past, so readers get a back and forth of Joan present and Joan past. What I really enjoyed about this writing style is that you get to see how Joan's secrets affect her future, now that everything is coming out we get to see the fallout it brings to Joan and her family. Joan was able to hide this secret for 50 years and it comes back to haunt her when she is too old to really fight anymore, thus begins the history of Joan's time during the war.

What really caught my attention with this book was that this was a spy story wrapped in a love story. Joan was a very naive girl and didn't really understand what she was getting into when she meets Sonya and Leo. But what she does know is that her conversations with Leo are always interesting and Joan quickly falls in love with Leo. Their relationship was an interesting one, and the story was really about these two (and Sonya). What was really difficult was how as Joan remembers her time in University, other secrets come out as well and I felt so bad for Joan, and yet wanted to yell that she should have seen it earlier.

Little by little we get to see how Joan's decisions in her past have affected her future. Her son is with her and learns that he has never known his mother and the truth is a difficult thing to hear. The love story between Joan and Leo was beautiful but what I loved even more was seeing how Joan took the heartbreak and how she learned to love again.

I loved how Jennie ended the story, she leaves a little something to the readers imagination... what really happened to Joan after everything? Jennie Rooney really gets into Joan's head and I really loved seeing what really caused her decision to do what she did. And also seeing how Joan was able to handle things, I really admired her character at times (even though there were the times I wanted to yell at her for being naive).

If you are a fan of Ian McEwan, I think RED JOAN is the perfect book for you. Jennie really keeps you guessing about things until the very end and the characters are very well developed.