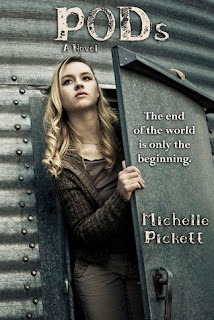 Received: Received a copy from Spencer Hill Press in exchange for an honest review

Seventeen-year-old Eva is a chosen one. Chosen to live, while others meet a swift and painful death from an incurable virus so lethal, a person is dead within days of symptoms emerging. In the POD system, a series of underground habitats built by the government, she waits with the other chosen for the deadly virus to claim those above. Separated from family and friends, it's in the PODs she meets David. And while true love might not conquer all, it's a balm for the broken soul.

After a year, scientists believe the population has died, and without living hosts, so has the virus. That's the theory, anyway. But when the PODs are opened, survivors find the surface holds a vicious secret. The virus mutated, infecting those left top-side and creating... monsters.

Eva and David hide from the infected in the abandoned PODs. Together they try to build a life--a new beginning. But the infected follow and are relentless in their attacks. Leaving Eva and David to fight for survival, and pray for a cure

I was really excited for this book, the idea of people chosen to live in PODs so that they can survive a deadly virus that is killing everyone really interested me (it kind of reminds me of the movie Contagion, the whole deadly virus thing). What I really liked is that this is realistic in a way, there are always new viruses being found and it takes time to find a cure for these things.

This story started out really interesting, and moved very quickly, there was a focus on the virus and Eva's relationships. But once Eva goes into the POD, I found that the story slowed down a lot and that the focus of the story shifted. I felt like the science aspect of the story got pushed too the background and that this story became more about the relationship between Eva and David. I understand that the book is a lot about their relationship, and I liked to see how it grew over the year they spent in the POD, it makes sense living in close quarters with one another you get to know each other and fall in love quicker.

I did also have a little issue with certain descriptions being constantly repeated, this mainly happened with David and Eva. Readers are constantly told how David smells, what his eyes look like and how good looking he is. I just felt like this was told so much so that I would come to love him too, and I felt like it was overdone.

Other than the romance aspect, this book was interesting, and I really hope that in the next book there is more about the virus and what the government is actually doing. I just felt that this book got distracted and took a more romantic twist instead of the science that I was hoping for. I can say that there were some great creepy scenes when we find out that the virus has mutated and evolved with time, seeing what the virus does to people really gave me chills and I can say I want to stay away from sick people after reading this.

The characters are great, and I did love Eva. She is strong and she does whatever possible to help those around her. She is someone who doesn't let others fight for her, she realizes when she needs to step up and won't let herself be put in a position where she cowers away from a fight. And as much as I liked David, I felt that he was trying to push Eva into this passive role where he did everything for her and he tried to shelter her from everything, that bugged me a lot about him. I hope to see more growth from these characters as the series goes on.

Honestly, this story was intriguing, but at some point it drifts off course, I did enjoy it for the most part but I do hope that book 2 will go back to the science of the virus and take a little break from the romance.
Posted by Andrea @ Cozy Up at 6:00 AM