Review: The Supremes at Earl's All-You-Can-Eat by Edward Kelsey Moore 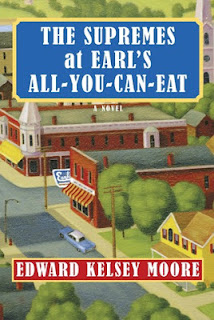 Pages: 320
Received: Received a copy from Random House of Canada in exchange for an honest review

Earl’s All-You-Can-Eat is home away from home for this inseparable , trio. Dubbed “the Supremes” by high school pals in the tumultuous 1960s, they weather life’s storms together for the next four decades. Now, during their most challenging year yet, dutiful, proud, and talented Clarice must struggle to keep up appearances as she deals with her husband’s humiliating infidelities. Beautiful, fragile Barbara Jean is rocked by the tragic reverberations of a youthful love affair. And fearless Odette engages in the most terrifying battle of her life while contending with the idea that she has inherited more than her broad frame from her notorious pot-smoking mother, Dora.

Through marriage, children, happiness, and the blues, these strong, funny women gather each Sundayat the same table at Earl’s diner for delicious food, juicy gossip, occasional tears, and uproarious banter.

With wit and love, style and sublime talent, Edward Kelsey Moore brings together four intertwined love stories, three devoted allies, and two sprightly earthbound spirits in a big-hearted debut novel that embraces the lives of people you will never forget.

I don't really know what I was expecting when I went into this book, so the story that I read actually kept me entertained since I didn't have any ideas going into it. The book was fun with a great emotional side to it as well. This is a book that is about a friendship that stays strong through many years and many hurdles. The Supremes are three women, who were given that name by high school friends and since then have stayed together. These three women are the most different people but when brought together they are the strongest group and help each other through everything.

I will admit I was nervous going into the book, having a male writer tell a story from a women's perspective is difficult and this is the story of the three different women. But Edward Kelsey Moore did a fantastic job bringing these stories to life. This book goes into detail of everything these three women have been through, and I enjoyed how Moore slowly reveals each of their pasts through things that have happened in the present. I found that he takes us on a journey and slowly Moore lets us into the lives of these friends so that by the end you feel like you have been let in on a secret and have joined "The Supremes" yourself.

The one thing that I found a little weird in the writing style was that, Odette's voice is from a first person narrative but everyone else is from the third person. I found this took away from my reading experience as the story kept switching perspectives. I wasn't sure if the whole story was supposed to be told from Odette's POV, but there were things that happened that Odette could not have known about. I believed that Moore should have had each of the three women tell their story or have the whole book told in thrid person narrative so as not to confuse the reader.

I really loved the characters in this book, and they really made for an interesting story. Odette was by far my favourite of the three women, she really is the strength of the group. It's explained that because of where Odette was born she has no fear, and since she grew up hearing that so much, she came to believe it herself. Whenever things were difficult, Odette would be the one to tell things as they are instead of beating around the bush (she's the type of friend that is true and you can tell she loves with all her heart). All in all I think the characters were the best part of the story, really watching them stick up for one another despite the differences.

The ending of this book really surprised me, I found myself getting emotional, but at the same time there was a great sarcastic type of humour. Edward Kelsey Moore did a great job telling this fun and beautiful story of friendship, and I hope that everyone can join this group of friends themselves.
Posted by Andrea @ Cozy Up at 6:00 AM