Review: Emilie and the Hollow World by Martha Wells 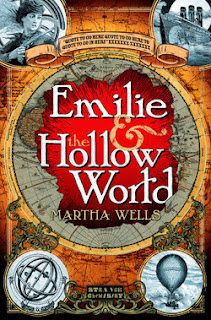 Pages: 287
Received: Received a copy from Strange Chemistry in exchange for an honest review

While running away from home for reasons that are eminently defensible, Emilie’s plans to stow away on the steamship Merry Bell and reach her cousin in the big city go awry, landing her on the wrong ship and at the beginning of a fantastic adventure.

Taken under the protection of Lady Marlende, Emilie learns that the crew hopes to use the aether currents and an experimental engine, and with the assistance of Lord Engal, journey to the interior of the planet in search of Marlende’s missing father.

With the ship damaged on arrival, they attempt to traverse the strange lands on their quest. But when evidence points to sabotage and they encounter the treacherous Lord Ivers, along with the strange race of the sea-lands, Emilie has to make some challenging decisions and take daring action if they are ever to reach the surface world again.

I was really surprised when this book arrived, it seemed so small for such an adventurous story, but what Martha Wells was able to fit into 287 pages was full of intrigue and I had so much fun reading this book. The cover is what first drew me in to the story, it's so colourful and different from many books out there, it really stands out on a bookshelf. And honestly, the story stands out as well (in my opinion), Martha Wells really engages her readers in The Hollow World.

This book was an adventure of a lifetime for me, I fell in love with Emilie very early on in the story. She is an adorable character in a crappy family situation, so she decides to run away and do something for herself. One little issue for me was that you don't really get to know Emilie and her situation until a little while into the book, she doesn't want to look bad so tries to keep it a secret why she has left. I wanted a little more from Emilie's past, but for this story it really worked. Her character is absolutely adorable, first I will talk about how she is an avid reader of adventure novels, this continually comes up in the book when things start happening. Everytime Emilie dealt with something new she would go back to thinking about things in the books she had read, this also helps her at times when she is in danger (I wonder if I can use some of the tactics I've read about in a dangerous situation...)

Another great aspect of this book was the steampunkiness of it. There was a great amount of explanation about how the contraptions run and the world was definitely interesting, though I was hoping for a little more explanation to it and the creatures from there. I think that some of the secondary characters needed a little bit more of a background, and that this story was just a little to short to get everything in. But I do think I overlooked that for such an action packed story. Right from the beginning Emilie is thrown into a war between two Lord's and from there we are just brought into more battle, I really loved everything that happened because there were so many twists that I did not see coming.

I did feel like a little more could have been added to the book to explain a few more things, but this action filled book was so much fun that you get taken with the world and everything that is happening. I also really liked that there wasn't a romance featured in this book, it was all about the characters. I do hope that Martha plans to write a sequel, I would love to see more of these characters!
Posted by Andrea @ Cozy Up at 6:00 AM