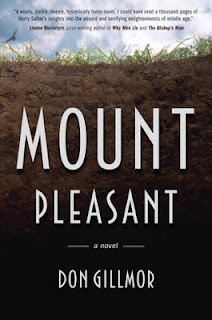 Pages: 304
Received: Received a copy from Random House of Canada in exchange for an honest review

Synopsis from the Publisher:

In middle age, debt has become the most significant relationship in Harry Salter's life. He was born to wealthy parents in leafy and privileged Rosedale, at a time when the city was still defined by its WASP elite. But nothing in life has turned out the way Harry was led to expect. He's unsure of his place in society, his marriage is crumbling, his son is bordering on estranged, and on top of it all his father is dying.

As he sits at his father's bedside, Harry inevitably daydreams about his inheritance. A couple of his father's millions would rescue him from his ballooning debt—maybe even save his marriage. But when the will is read, all that's left for Harry is $4200. Dale Salter's money is gone. Out of desperation and disbelief, Harry starts to dig into what happened to the money. As he follows a trail strewn with family secrets and unsavory suspicions, he discovers not only that old money has lost its grip and new money taken on an ugly hue, but that his whole existence been cast into shadow by the weight of his expectations.

I always love finding books that take place in Toronto, I find they are few and far between, and this one had a specific focus, that of the more well-off area of Rosedale and it's surroundings. While I found this book interesting, I had a few problems keeping my attention on what was happening. I'm a huge fan of books that deal with family and working through issues they have, but I just had a hard time connecting with the characters in this book.

This book is centred around the idea of money (which I thought was actually really intriguing). Harry grew up in the privileged area of Rosedale (you know that part of Toronto with the huge houses.. .yeah I'd like to go there one day), he is used to having the money to spend on what he likes. Now he has grown up and has a family of his own, and his situation is completely different. Harry has gotten himself into loads of debt and is ultimately waiting for his father to pass to come into his inheritance so that he can pay it off and start a new life. When this happens, Harry finds that his father didn't have any money in the end either, and so begins a search for this lost inheritance.

The idea that readers are a fly on the wall of Harry's life was interesting, but those type of books are difficult for me to get into, every little thing is described in detail (which really gets a reader into the setting of a book, and was well done with this book). I will say that Gillmor's writing style kept me entertained and yet at the same time the story just fell a little flat, and a part of it was the descriptions because those are not my type of books.

The parts that kept me reading this book were the family interactions, and seeing how they would eventually deal with these money issues. I really felt for these characters at points because this is such a hard thing to go through, and so any more people are dealing with not being able to afford anything these days. The problem with them though was that they couldn't communicate with one another and instead continued to spend money that they didn't have.

Gillmor definitely took on a great topic in his book, making it relatable to many readers out there, and I can see many people enjoying what he has done with his story. There were some interesting twists as to what happened to the money, but in the end this book just couldn't keep my interest.
Posted by Andrea @ Cozy Up at 6:00 AM