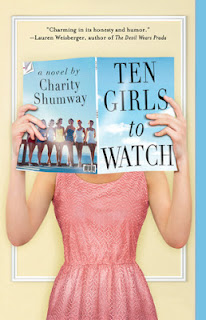 
A funny and uplifting debut novel about stumbling through the early years of adulthood while taking (or not taking) the advice of the women who've gone before you. Dawn West is trying to make her way in . She’s got an ex-boyfriend she can’t quite stop seeing, a writing career that’s gotten about as far as penning an online lawn care advice column, and a small hometown in Oregon that’s her last recourse if she can’t make next month’s rent. So when Dawn lands a job tracking down the past winners of Charm magazine’s “Ten Girls to Watch” contest, she’s thrilled. Not only is she being paid to interview hundreds of fascinating women, but she’s also sharing office space with “Secret Agent Romance,” Charm’s resident dating columnist, and he just happens to be giving her butterflies. As Dawn gets to know the life stories of these former winners, she’ll discover that success, love, and friendship can be found in the most unexpected of places. And even more importantly, she’ll find that though those who have gone before us can be role models, ultimately, we each have to carve our own way. Both an insightful look at the trajectory of female experience over the past fifty years and a witty coming of age story, Ten Girls to Watch introduces an unforgettable new voice in women’s fiction.

Going into this book I felt like I was reading another chick lit novel, it definitely has all the aspects of that genre. The ex-boyfriend that is still in her mind and the new guy that just shows up in her life. But going through this was much more than any old chick lit, this book was definitely an inspirational novel to a younger generation just coming out of school.

I really enjoyed parts of this novel because I connected so well to Dawn, being in the exact position she is in throughout this book, working hard to make money in a field that is very difficult to break into, Shumway really highlights the challenges that face someone just out of school, trying to make money wherever you can while always questioning if you chose the right path (I actually have a conversation with family members at least once a month wondering if I did the right thing...)

I was a bit disappointed with the story all together though, I felt that Dawn's own story was placed in the background and that there was not much character development. Everything was focused on the winners of the Ten Girls to Watch contest. I understand that this story was supposed to be about the women throughout the years but I still felt that it should have been Dawn's story as well.

This definitely was an inspirational story and I would recommend it to people who are in school and just out of university/college. It was interesting to see these stories of women who had big dreams, some were achieved and others weren't. But how these women got to where they were in the present was beautiful.
Posted by Andrea @ Cozy Up at 9:00 AM