Review: Any Other Night by Anne Pfeffer 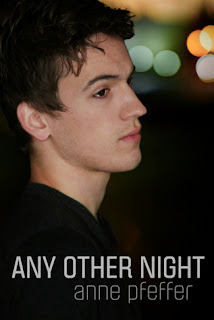 Pages: 278
Received: Received from author in exchange for an honest review

Any other night, Ryan Mills would have driven his best friend, Michael, to Emily's sweet sixteen party at the Breakers Club. Instead, determined to win over the birthday girl, he goes to the party early and alone, setting off a chain of events that ends with a car accident in which Michael dies.


Ryan blames himself for what happened to Michael. As far as he's concerned, he doesn't deserve to have love or ever be happy again. Then he learns Michael left a secret behind. Ryan feels compelled to take on his friend's unfinished business, and in the process, changes his life forever and becomes a man.

I was really excited when Anne contacted me and asked if I would be interested in reviewing this, I'd seen a few reviews on it at some other blogs and was really interested in a story that deals with such a hard topic. I was really taken with the main character being a male, I feel like when a contemporary novel is written about emotional issues, it's usually a female character going through them.

Anne does a great job writing from a male perspective in this novel. She really hits home with a lot of the issues that males go through at this age, and then adds in a tragedy so that Ryan has even more to deal with on top of school, girls and family. Reading as Ryan goes through the motions of dealing with the guilt of Michael's loss is hard.

I did love how Anne wrote Ryan's character. He was strong and always there to help people. He wanted to be there for the people that Michael left behind. Ryan really grows throughout the book, learning how to become an adult, even though he's only sixteen.

The relationship between Emily and Ryan was a big part of the story but I really like that there is so much more going on around it that it's not the central part of it. Ryan has a lot of other things to deal with, like issues with school, his family, and his friends. I also really liked that the relationship was real, neither character knows what their future holds, they argue and talk about things.

This story was a great tale on growing up, from a male's perspective. Anne does a great job with this contemporary novel. This story will stick with you long after you've read it.
Posted by Andrea @ Cozy Up at 10:16 AM