Review: God Save The Queen by Kate Locke 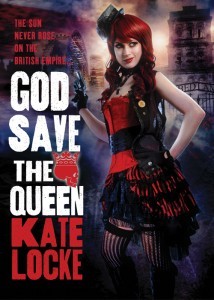 The undead matriarch of a Britain where the Aristocracy is made up of werewolves and vampires, where goblins live underground and mothers know better than to let their children out after dark. A world where being nobility means being infected with the Plague (side-effects include undeath), Hysteria is the popular affliction of the day, and leeches are considered a delicacy. And a world where technology lives side by side with magic. The year is 2012 and Pax Britannia still reigns.

Xandra Vardan is a member of the elite Royal Guard, and it is her duty to protect the Aristocracy. But when her sister goes missing, Xandra will set out on a path that undermines everything she believed in and uncover a conspiracy that threatens to topple the empire. And she is the key-the prize in a very dangerous struggle.

This story is an alternate history where Queen Victoria still rules and now the aristocracy has not only humans, but werewolves, vampires and goblins. Reading about how they all live together despite the fact that they all dislike on another is interesting. There is a whole hierarchy that is well explained, the book takes you back to the style of the Victorian era except in a modern world, with modern electronics.

I love that Locke is able to explain how everything came about. Right from the beginning you are taken into the history of how vamps and weres came to be, and even how the goblins were created. It's nice to have a detailed explanation. There is even a glossary in the back of the book that details some of the slang words used throughout the book (I myself am not a fan of glossaries in the back because I hate flipping back and forth, but when the word is first mentioned, Locke does explain what it is).

Right from the beginning of this book I could tell it would be action packed, and it was! Xandra is a kick ass heroine throughout this book who fights to find out answers for all her questions. I do admit, for a lot of the beginning of the book I found Xandra to be a bit naive about everything going around, especially when she starts to uncover secrets, she still closes her eyes to what is happening.

This book was a lot of fun to read. There is some romance to the story but it is more in the background which was great. I can see this being a great book for teen readers. It is what a lot of them are looking for, there is action, swearing and some romance. Definitely one to check out.
Posted by Andrea @ Cozy Up at 11:50 AM