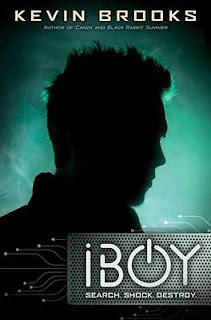 
What can he do with his new powers -- and what are they doing to him?

Before the attack, Tom Harvey was just an average teen. But a head-on collision with high technology has turned him into an actualized App. Fragments of a shattered iPhone are embedded in his brain. And they're having an extraordinary effect on his every thought.

Because now Tom knows, sees, and can do more than any normal boy ever could. But with his new powers comes a choice: To avenge Lucy, the girl he loves, will he hunt down the vicious gangsters who hurt her? Will he take the law into his own electric hands and exterminate them from the South London housing projects where, by fear and violence, they rule?

Not even his mental search engine can predict the shocking outcome of iBoy's actions.

When I looked at this book I thought that it was a really interesting storyline, definitely something I have never heard of before! I mean really, a book about a boy who is basically an iPhone! where do people come up with these ideas?

I found this to be a really quick read, I couldn't get myself to put it down (really who needs sleep anyway). The storyline progressed really quick and I found myself engrossed in what was happening to Tom and how he dealt with it. There are a lot of great action scenes throughout the novel where Tom really gets to be an action hero (it's great the small geek getting to be the guy people are scared of).

I was a little disappointed by the ending, I found that with everything that happened, the ending kind of fizzled out a little (though there was a nice big bang right before, which would be hard to follow). I just found that there were still a few things left unexplained at the end of the book (like what exactly happened with "iBoy").

More from Kevin Brooks
Black Rabbit Summer
Kissing the Rain
Martyn Pig
Posted by Andrea @ Cozy Up at 9:00 AM