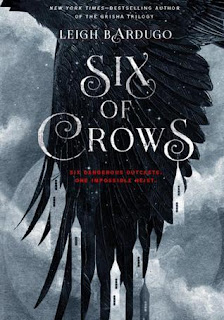 Publisher: Henry Holt and Company
Series: Six of Crows #1
Pages: 480
Received: Received an e-copy from Raincoast Books in exchange for an honest review

Ketterdam: a bustling hub of international trade where anything can be had for the right price—and no one knows that better than criminal prodigy Kaz Brekker. Kaz is offered a chance at a deadly heist that could make him rich beyond his wildest dreams. But he can't pull it off alone...

A convict with a thirst for revenge.

A sharpshooter who can't walk away from a wager.

A runaway with a privileged past.

A spy known as the Wraith.

A Heartrender using her magic to survive the slums.

A thief with a gift for unlikely escapes.

Six dangerous outcasts. One impossible heist. Kaz's crew is the only thing that might stand between the world and destruction—if they don't kill each other first.

Gah!! That is my first reaction to how awesome and enthralling this book was... how have I waited so long to finally pick up a Leigh Bardugo book?!?!?! I've had her Grisha trilogy waiting to be read, but then this one popped up and I picked it up first, and I am in love right from the beginning. This book is filled with action and romance throughout and I was definitely on high alert, I just wanted it to keep going, I will be sad to see this series end, it's one that I want to go on forever.

This book is a lot about a quest, not only a quest for retrieving something, but also one of revenge for some characters. What I really loved about this book is that it is basically about a group of ragtag criminals coming together to get a job done. We meet each of these other characters one by one, and slowly learn more about them and how they met Kaz in the past and why they are so willing to help him with such a dangerous plot. Each of these characters has a different skill and they all work so well together to help pull off this heist.

It was interesting to see how Leigh Bardugo differentiates each of her characters in such a large way, not only does each of them have a special skill but their personalities are all very different too. Kaz is the ringleader of this group, in a way he has saved each of them from a worse fate than where they are now, it's interesting to see how each of them view Kaz as a person. It is fun watching these characters try to work together without killing each other, there are a lot of arguments that add a great humour element to the story.

A lot happens in the story and I found that I got to learn a little bit about the world but there is definitely still more to learn about where each of these characters came from. I love that Bardugo gives readers perspectives of each of the characters, it brings us closer with them, it seems like a lot but Bardugo really makes it work for readers. Every one of the characters are tricky in their own way, you can never know what they are thinking, but each of them shows of how smart and strong they truly are. And the ending... that just got my heart and I need more from Kaz and his group ASAP!!!

I can say that I loved every minute of this book and I think many people will, it's the type of book that can grab at many different genres. But this is definitely for fans of speculative fiction, Bardugo has a way with her magical characters that make the different types of people seem so real. Definitely pick up a Leigh Bardugo book, you will not be disappointed.