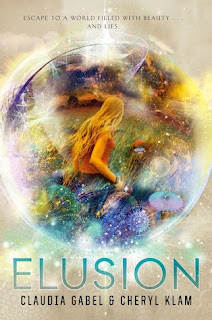 Soon, Elusion® will change the world and life as we know it.

A new technology called Elusion is sweeping the country. An app, visor and wristband will virtually transport you to an exotic destination where adventure can be pursued without the complications—or consequences—of real life.

Regan is an Elusion insider. Or at least she used to be. Her father invented the program, and her best friend, Patrick, heir to the tech giant Orexis, is about to release it nationwide. But ever since her father’s unexpected death, Regan can’t bear to Escape, especially since waking up from the dream means crashing back to her grim reality.

Still, when there are rumors of trouble in Elusion—accusations that it’s addictive and dangerous— Regan is determined to defend it. But the critics of Elusion come from surprising sources, including Josh, the handsome skeptic with his own personal stakes. As Regan investigates the claims, she discovers a disturbing web of secrets. She will soon have to choose between love and loyalty…a decision that will affect the lives of millions.

Suspense, thrills, and romance fuel this near-future story about the seductive nature of a perfect virtual world, and how far one girl will go to uncover the truth behind the illusions.

This book had me very interested, I love the idea that is brought out in this book, in a way I felt that the technology of Elusion is a way to get away from life, exactly what reading books is for me. Regan used to know all about Elusion but after he father died she can't bring herself to go back to this place that is supposed to be so happy and relaxing.

Despite Regan not wanting to be a part of Elusion because it brings back memories of her father, she still wants to defend it when rumours start going around about how dangerous it is for people. Her best friend is the one who has taken over the programming of Elusion and she wants to help him. Regan becomes very defensive but slowly she realizes that there is something being hidden from her.

Regan is very loyal to those she loves, and she wants to defend not only her best friend but her father's memory as much as possible. But at the same time when Regan starts to see that she may be manipulated she delves deep for the truth, but tries to go about it in a way that she won't hurt anyone she loves. There is a lot of mystery behind what is happening in Elusion and who is behind the problems that are happening, but everything becomes more dangerous for Regan as she gets closer to the truth. There are a lot of consequences for Regan if she finds out what really happened to her father and how Patrick is involved in everything.

This seems like a realistic story set in the future, video games are becoming more live action and Elusion is similar to that. People use Elusion to meet other people in a different world and get away from real life, it is such an interesting premise in my mind. I really felt that Claudia Gabel realistically shows how addictive a virtual world can be, more people are likely to want to spend all their time there.

This was truly a fun book, with a lot of mystery to it and a great amount of romance (though in my opinion, the romance did not have much to do with the story). As the story keeps going I needed to keep reading to find out what exactly was going with Elusion and why all this is happening. I definitely want to read the next one to see where things go from that huge cliffhanger ending!