Review: The Spymistress by Jennifer Chiaverini 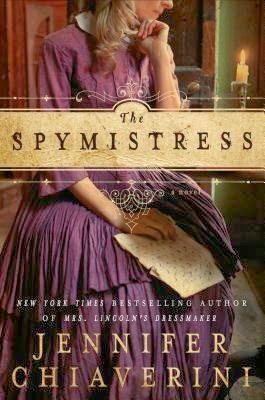 Born to slave-holding aristocracy in , and educated by Northern Quakers, Elizabeth Van Lew was a paradox of her time. When her native state seceded in April 1861, Van Lew’s convictions compelled her to defy the new Confederate regime. Pledging her loyalty to the Lincoln White House, her courage would never waver, even as her wartime actions threatened not only her reputation, but also her life.

Van Lew’s skills in gathering military intelligence were unparalleled. She helped to construct the Richmond Underground and orchestrated escapes from the infamous Confederate Libby Prison under the guise of humanitarian aid. Her spy ring’s reach was vast, from clerks in the Confederate War and Navy Departments to the very home of Confederate President Jefferson Davis.

Although Van Lew was inducted posthumously into the Military Intelligence Hall of Fame, the astonishing scope of her achievements has never been widely known. In Chiaverini’s riveting tale of high-stakes espionage, a great heroine of the Civil War finally gets her due.

Another historical fiction book that definitely caught my attention when I read the synopsis, unlike all these books that usually revolve around WWII, this one takes on the Civil War (which being a Canadian, I never learned as much about it as I could have). What really caught my attention is how this book revolves around a woman who is helping during the war because people believe her to be on the Confederate side.

Elizabeth Van Lew was a very intriguing character, I loved her loyalty to a true cause and the way she fought to preserve her beliefs. This book really gives life to a true hero, seeing what she jeopardizes in order to help the fight to abolish slavery, even getting her mother involved at times. Even though Elizabeth is threatened in so many aspects, she also realizes that she needs to make sure her loved ones are safe, going as far as making sure the rest of the town sees her family as Confederates.

I will say that even though I loved the idea behind the story, I didn't completely love the story itself. I felt that I was confused through some of the story, and found myself having to repeat sections because I lost what was happening. Elizabeth goes through so much, and yet it feels like the story needs more to really capture me. I definitely saw Elizabeth's bravery and how much she cared, but something about her character felt one-dimensional at times. I just couldn't completely connect with the story as a whole.

I really wanted to love this novel about a woman helping change history in a major way, but I needed more to Elizabeth's character to really enjoy this one. It is a great start but I'm a person who likes a little more depth. The story was good and I do recommend checking it out if you are interested in historical fiction that focuses on different times, it just wasn't perfection for me.
Posted by Andrea @ Cozy Up at 6:00 AM