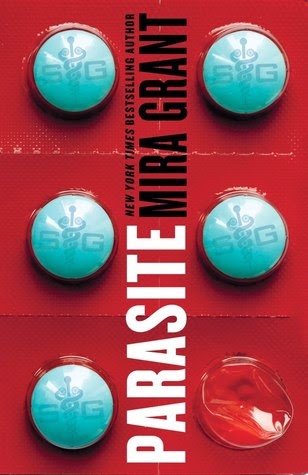 A decade in the future, humanity thrives in the absence of sickness and disease.

We owe our good health to a humble parasite - a genetically engineered tapeworm developed by the pioneering SymboGen Corporation. When implanted, the tapeworm protects us from illness, boosts our immune system - even secretes designer drugs. It's been successful beyond the scientists' wildest dreams. Now, years on, almost every human being has a SymboGen tapeworm living within them.

But these parasites are getting restless. They want their own lives...and will do anything to get them.

This was a large book with a lot of information to it, but it was such an interesting and creepy book. In a future where people are wanting to be very healthy, scientists discover that by ingesting a parasite it will kill boost a person's immune system and help them stay ahead of almost any disease. Now that almost everyone has the parasite inside of them, things are beginning to change and a new "illness" seems to be developing.

Mira Grant has developed a story that is disturbing because it has an air of reality to it. I could imagine something like this happening, something taking living taking over human bodies for them to live their own lives. This story really takes it's time to explain what is happening, it is a very slow build, but as the book goes along more information comes out. There is a lot of running around where you are not sure about people's motivations and you really want to know more.

I really enjoyed Sally's character, she is someone that shows how well the parasite works. After being in an accident that basically left her brain dead, Sally comes back to life because of the parasite she has inside of her. Now she is under observation to see what happened and how this can help the rest of the human population. Readers can really see Sally grow, she begins as a very naive girl who is re-learning everything about her life and how to do everything. She is still under her parents continual watch and she has problems being seen as an adult.

There were a few things that came about that didn't really surprise me, I was waiting for some information to be revealed, but the way it ended was shocking and leaves readers wanting more. You can see a war coming between many different peoples, everyone with a different reason for wanting the information. After some intense things, Mira leaves readers shocked and eagerly awaiting the next book.
Posted by Andrea @ Cozy Up at 6:00 AM