Review: This House is Haunted by John Boyne 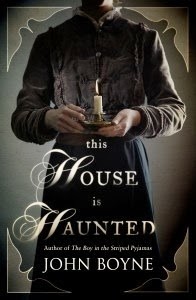 1867. Eliza Caine arrives in to take up her position as governess at Gaudlin Hall on a dark and chilling night. As she makes her way across the station platform, a pair of invisible hands push her from behind into the path of an approaching train. She is only saved by the vigilance of a passing doctor.

When she finally arrives, shaken, at the hall she is greeted by the two children in her care, Isabella and Eustace. There are no parents, no adults at all, and no one to represent her mysterious employer. The children offer no explanation. Later that night in her room, a second terrifying experience further reinforces the sense that something is very wrong.

From the moment she rises the following morning, her every step seems dogged by a malign presence which lives within Gaudlin's walls. Eliza realises that if she and the children are to survive its violent attentions, she must first uncover the hall's long-buried secrets and confront the demons of its past.

For such a short book, this story definitely packed a lot in it. I was sent this book a little while ago and I let it sit on my shelf not really knowing much about it. I'm glad I decided to finally get around to reading it. It was a perfect amount of creepiness to it that really made the book. This was a dark story and yet in a weird way it is also kind of a loving story, and I really enjoyed that addition.

Right from the beginning of the book you can see that something is not right, and Eliza notices it as well. Things just keep going from bad to worse, and Eliza spends her time investigating what happened at this house. What I really liked was what Eliza would do for these children, it is her job to take care of Isabella and Eustace and she takes that very seriously.

The children were very interesting characters, and the way they acted really added to the story. They have had some tough times, and you can see that they have some coping problems. These children were creepy and you had no idea what was going on, Isabella was the more special of the two I believe. All in all, Eliza was such a strong character, in the beginning she seems like a very innocent girl who doesn't really know a lot about the world, but you see her strength as she deals with the people in town and she tries to unravel the mystery of Gaudlin Hall.

This book kept me up at night, wondering what crazy things would happen next for Eliza and the children. The ending of this book was crazy and I loved what happened, and how you certain things get explained. The one thing about this book that really kept me going was how throughout the story, John Boyne really shows that family is everything, it makes you think sometimes about what you have and that you need to cherish those close to you.

This was a perfect ghost story, and one that will keep you going, you just won't want to put it down.
Posted by Andrea @ Cozy Up at 6:00 AM