Review: The Girl With A Clock For A Heart by Peter Swanson 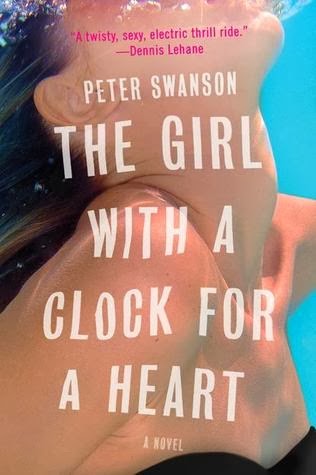 George Foss never thought he'd see her again, but on a late-August night in , there she is, in his local bar, Jack's Tavern.

When George first met her, she was an eighteen-year-old college freshman from . She and George became inseparable in their first fall semester, so George was devastated when he got the news that she had committed suicide over Christmas break. But, as he stood in the living room of the girl's grieving parents, he realized the girl in the photo on their mantelpiece - the one who had committed suicide - was not his girlfriend. Later, he discovered the true identity of the girl he had loved - and of the things she may have done to escape her past.

Now, twenty years later, she's back, and she's telling George that he's the only one who can help her...

This book sounded different and interesting, and the title definitely had me asking questions. I can say that the book kept me wondering which was good because I wanted to keep reading to see what was going on, yet I felt confused through a lot of the story and it brought my enjoyment down a bit.

The story follows George as he reunites with his university girlfriend. This book is definitely a great mystery, as the narrative tells the story of what happened when George was in university as well as what is happening in the present. I really enjoyed the build up to what happened, and learning about this woman and her back story. At the same time I felt that so much was going on and that I needed to re-read a few parts to figure out what was going on.

George was a bit of an unlikeable character for me, everything that happens to him throughout the book, I partly blame him for actually getting into these situations. He just seemed to take explanations at face value and not really think about what was going on, he just went along with it. I had problems getting through the story and believing that someone would actually go along with some of the things, especially with what George knows about this girl.

After reading this story it made me wonder what people really do to escape their past. This girl has had problems that make her just want to run away, and yet it surprises me to see what she does. The book asks the question, what lengths would you go through to escape your past? The ending of the book left me still wondering, especially about George's state of mind himself. But at the same time the ending really shocked me to think of the conclusion George comes to. In some ways I did enjoy this book, but in others I felt like I had some difficulties getting through it. This is a great book that moves quickly, and I think mystery/thriller lovers will enjoy it, in the end it wasn't completely for me.
Posted by Andrea @ Cozy Up at 6:00 AM