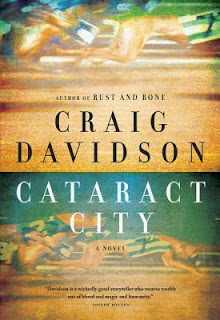 Owen and Duncan are childhood friends who've grown up in picturesque --known to them by the grittier name . As the two know well, there's more to the bordertown than meets the eye: behind the gaudy storefronts and sidewalk vendors, past the hawkers of tourist T-shirts and cheap souvenirs live the real people who scrape together a living by toiling at the , the local cookie factory. And then there are the truly desperate, those who find themselves drawn to the borderline and a world of dog-racing, bare-knuckle fighting, and night-time smuggling.

Owen and Duncan think they are different: both dream of escape, a longing made more urgent by a near-death incident in childhood that sealed their bond. But in adulthood their paths diverge, and as , the less privileged, falls deep into the town's underworld, he and Owen become reluctant adversaries at opposite ends of the law. At stake is not only survival and escape, but a lifelong friendship that can only be broken at an unthinkable price.

I absolutely love being able to feature Canadian books on this blog, and CATARACT CITY is such a strong book and I am glad to see it on the longlist for the Giller because it definitely deserves recognition. This is a story about a strong friendship between two boys that have been through so much together.

I really enjoyed the history of Niagara Falls inserted into this book, there was so much I didn't know about the people that lived there, and I had no idea it was called "Cataract City". It's great when I can learn history in a book like this. This book is told from both Owen and Duncan's perspectives as they are now and as they remember the past and what led to where they are.

I was really intrigued by these two characters, they are both very flawed and that makes their story interesting to follow to see where they take their lives from how they grew up. Owen and Duncan experience something in childhood that bonds their friendship and yet also breaks their friendship when their parents decide that they need time away from each other. Over the years there are things that continually bring these two together even though they are on different paths.

I loved that this book takes readers into a darker part of Niagara Falls with dog-racing, fighting, and smuggling of items. This is a Niagara Falls that I never thought existed and I'm interested to really learn more about this dark side. This is real life and it is scary to know that this existed.

Craig Davidson has brought these characters to life and really shown a beautiful friendship that is able to withstand many issues, they are brothers and help each other out. I loved their interactions with one another as their friendship grows and falls apart, and yet still they come back together. I'm happy to have read this book because it really makes me appreciate the friendships I have in my life and I want to hold onto those.

This is a great book with a lot of emotions running around as these two boys grow to find themselves and what they want to do with their future.
Posted by Andrea @ Cozy Up at 12:27 PM