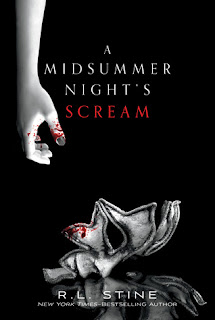 Get ready for laughter to turn into screams in R.L. Stine's re-imagining of Shakespeare's classic romantic comedy A Midsummer Night's Dream.

Everyone knows that Mayhem Manor is cursed. After production on the horror film was stopped due to a series of mysterious deaths, it became a Hollywood legend--which makes it perfect for Claire and her family. If they can successfully finish the film, it should be enough to save their ailing movie studio.

Sure, the old haunted house is creepy, and strange stuff has been happening, but this is Claire's chance. Her chance to become the movie star she's always dreamed and her chance to finally convince her friend Jake that she is girlfriend material. Of course, the fact that Jake thinks he's in love with her best friend, Delia, who is crushing hard on Jake's friend Shawn, who insists on following Claire around, could be a problem, but Claire is sure she can figure it out. After all, the course of true love never did run smooth.

But once shooting starts, "creepy and strange" morph into "bloody and deadly," as the lines between film and reality begin to blur...

I grew up with R. L. Stine, so anytime I see he has a new book it will be at the top of my list! He has always been a master of horror for young adults, Goosebumps and Fear Street being awesome series that would give me nightmares. R. L. Stine definitely goes back to his roots with this book, but I think it's different for me now that I'm older. Don't get me wrong, this book is still awesome and I enjoyed the story, but I think I would have liked it more at a younger age.

I thought going into this that it was going to be very similar to Shakespeare's A Midsummer Night's Dream but this book more just takes elements from the play and incorporates it into a completely different story. I will admit that this story did seem like something I've heard of before, years after a film is shut down because of many deaths, a film company decides to recreate the movie, and then strange things begin to happen.

This book has the gore that I would expect from an R. L. Stine story, and a lot of creepy things happen, I was really intrigued with the story and how Shakespeare's play came into effect in this book. I actually found it to be so much fun! And the book went by very fast, the chapters are short and I found that I just had to keep going to see where Stine would take the story.

The one thing in this book that was a little off for me was the romance story. It wasn't believable for me, I felt that it was very round-a-bout and it was one thing that turned me off the story. Claire is in love with her friend Jake, who barely notices her because he is interested in her other friend, Delia, and yet Jake is always off with all these other girls at the same time. I just felt that none of the romance made sense, and that it was just thrown in there to add in that extra part from A Midsummer Night's Dream. I honestly think the story would have been better without the romance.

This book took me back to my childhood and I was always love R. L. Stine, even though it wasn't amazing and I had some issues, but it was a great creepy read, with a lot of gore and violence. If you loved R. L. Stine as a child then I say check out his latest book for a good time.