Review: Boy Nobody by Allen Zadoff 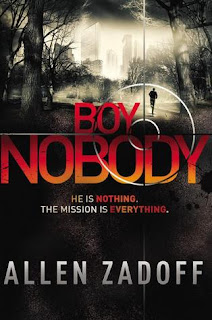 They needed the perfect assassin.

Boy Nobody is the perennial new kid in school, the one few notice and nobody thinks much about. He shows up in a new high school in a new town under a new name, makes a few friends, and doesn't stay long. Just long enough for someone in his new friend's family to die-of "natural causes." Mission accomplished, Boy Nobody disappears, moving on to the next target.

But when he's assigned to the mayor of New York City, things change. The daughter is unlike anyone he has encountered before; the mayor reminds him of his father. And when memories and questions surface, his handlers at The Program are watching. Because somewhere deep inside, Boy Nobody is somebody: the kid he once was; the teen who wants normal things, like a real home and parents; a young man who wants out. And who just might want those things badly enough to sabotage The Program's mission.

In this action-packed series debut, author Allen Zadoff pens a page-turning thriller that is as thought-provoking as it is gripping, introducing an utterly original and unforgettable antihero.

I was very intrigued with this story, a teenager who has been recruited to be an assassin. Boy Nobody doesn't have a name that the reader knows, every town he is someone different, he becomes close with someone and then does his job and is gone, nobody realizes what he does and he is never remembered.

I was interested right at the opening of this book, readers see "Boy Nobody" at the end of a job and what he actually does. You follow this boy as he receives his new assignment, one that needs be done quick. Once he gets into his assignment, he realizes that things are different for him and he is reminded of his past, and his family.

I have to say this was definitely an action packed story with quite a few twists, and an ending that I did not see coming. I had this one idea of what was going to happen throughout the entire book and then Zadoff completely turned the story around. It was interesting to follow this teenager around and slowly learn how he got into this job and what happened to his family. The idea of a teen being an assassin for "The Program" was intriguing, and  it leads to some interesting things happening to this boy, you know nothing can go smoothly forever, and there are a lot of hiccoughs in this story.

What I really loved was that as "Boy Nobody" got closer to the mayor he remembered his own father more and more. The relationship between the mayor and his daughter is very well done, even though he is someone that has so much media attention, he still makes time for his daughter. I loved their interactions, and how he continually thought about his daughter.

I really felt bad for the main character, he moves from town to town and is always alone. When he meets the mayor and his daughter, that need for family begins to show. What I really want to know more about is "The Program, their background and who actually runs it. I think that will come up more in the next book, and that is something that will definitely keep me reading this series.

Honestly this book was gripping and the ending leaves you wanting to know more about "The Program" and "Boy Nobody".